AMES, Iowa -- On Wednesday, April 16, people across the nation will stop and reflect on the first anniversary of the Virginia Tech tragedy, when student Seung Hui Cho gunned down 32 students and teachers and injured at least 26 others. That event has become a reference point used by politicians, activists and concerned citizens to shape public debate about issues from gun control, to mental health, to campus violence and security.

That's not surprising, says Brian Monahan, an assistant professor of sociology at Iowa State University. Monahan has been studying how the media create "public dramas," which affect how the public understands and responds to certain events and issues.

Monahan defines public drama as a particular format used by reporters to organize and present news. He has examined news coverage of September 11, 2001, in detail, and his research shows how media constructed the events of that day into a public drama that turned "9/11" into a political and social resource that continues to be used to great effect today. Monahan's findings will be published in a forthcoming book by New York University Press.

One of the hallmarks of public drama is a high volume of news coverage, although Monahan says there is more to it than that.

"What is really crucial to understanding how public dramas work is to look at the news elements that are most prominently featured -- things like drama, emotion, melodrama, human interest and so on -- and how all of these elements get pieced together into a story that has a fairly simplistic narrative arc that is both interesting and easy to follow," he said. "This is important because how news gets packaged and presented to us really influences how we talk about and react to the events and issues that capture our attention."

The realities of public drama coverage

While news presented as a public drama may make for captivating television or interesting reading, Monahan reports that it often results in an incomplete understanding of events and issues. As a result, the public ends up with an overly simplistic and often skewed understanding of what has happened, why it has happened and what should be done in response.

Monahan says we can see this in the coverage and aftermath of 9/11.

"The causes and consequences of those attacks and their aftermath were tremendously complex," he said. "Yet much of the mainstream coverage boiled it down to heroes, melodrama, captivating settings and scenes, dramatic moments and fairly compelling human-interest stories, which meant that the more complex issues rarely found their way into the public discussion."

He sees similar processes at work in the coverage of the Virginia Tech tragedy.

"What is a concern here is that the mainstream press coverage of a case like Virginia Tech often looked more like an episode of 'Law and Order' than a dispassionate investigation and nuanced assessment of the broader range of causes and consequences, which would be much more beneficial in the long run," said Monahan, who also conducts research in criminology and social problems.

The conflict between campus ideals and security

And in the aftermath of Virginia Tech, Monahan points out that the continuing focus on the most dramatic and emotional aspects of the shooting has left little room in news cycles to discuss the philosophical and practical complexities inherent to issues of campus security.

"The campus ideals are about openness and, not only intellectual freedom, but freedom of physical movement as well," Monahan said. "All of those ideals are fundamentally at odds with the crime control-oriented responses that are most often advocated by media officials and industry experts. I'm not saying we shouldn't have a crime control response, but it's just not as simple as it is often made out to be.

"So, there's an interesting tension there that has been noticeably absent from much of the public discussion," he said. "You can't lock down a campus, certainly not for an extended period of time or in a prolonged preventive manner, without fundamentally altering the very foundation of work and life on that campus. In a high school, when these issues become a big deal, you can put security guards at doors and put metal detectors at the one or two entrances into the school. How do you do that here? So it's just so much more complex than most people consider it to be, and I think that our understanding and response to these issues would be greatly improved by getting some of these complexities back into the discussion." 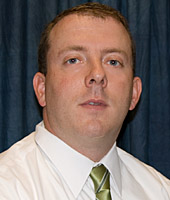 Brian Monahan, an assistant professor of sociology at ISU, says the first anniversary of the Virginia Tech shooting on Wednesday, April 16, is following the pattern of "public dramas." His research on how media constructed the events of Sept. 11, 2001 into the iconic public drama "9/11" will be the topic of a book he's publishing next year.

"What is a concern here is that the mainstream press coverage of a case like Virginia Tech often looked more like an episode of 'Law and Order' than a dispassionate investigation and nuanced assessment of the broader range of causes and consequences, which would be much more beneficial in the long run."