AMES, Iowa -- Daily news accounts would suggest that the nation's colors are changing from red, white and blue to green. The "greening" of corporate America seems to be all the rage.

A recent Christian Science Monitor story profiled BP's "Helios House" in Los Angeles, the nation's first gas station to be certified by the Leadership in Energy and Environmental Design.

Wire service reports indicate that U.S. auto giant General Motors is considering shifting its focus from gas-guzzling trucks to smaller, more fuel-efficient vehicles, while Toyota will begin to produce its popular Prius hybrid in the U.S. for the first time in late 2010 in response to rising consumer demand for smaller, fuel-efficient cars.

But as America increasingly goes green, an Iowa State business professor says corporate leaders should be concerned about another shade of green -- as in the color of money -- while making their sustainable plans. Frank Montabon, an associate professor of operations and supply chain management in ISU's College of Business, contends that more environmentally friendly business practices aren't truly "sustainable" if they can't make money.

"All of this (sustainability) is not going to happen unless they (businesses) can make a buck and the community likes the changes," said Montabon, a founding member of ISU's Council on Sustainability. "So organizations also need to change the business model. That's a big part of the equation when you talk about environmental issues and sustainability."

Montabon has conducted extensive research in the area of environmentally responsible manufacturing, including analysis of 45 corporate reports in "An Examination of Corporate Reporting, Environmental Management Practices and Firm Performance," a study which was published in the August 2007 issue of The Journal of Operations Management. He found that when it comes to greener practices, attitude is everything.

"The early adopters (of environmentally responsible manufacturing) are at one end of our five categories, and the laggards are at the other end," Montabon said. "W e found that the success of the efforts really does play to that issue of attitude. If I'm an early adopter and I'm going to recycle because I believe it's the right thing to do and I have faith that it's going to work, it tends to work. On the other end when you have laggards, they're the folks who are saying 'I'm not going to recycle unless the government starts issuing fines for not recycling.' And with those firms, you find that they don't get much out of it."

Montabon reports that "lagging" companies often are forced to retro-fit their operations to react to new environmental requirements. For that reason, they typically don't find greener practices to be profitable.

"If your reward (for becoming greener) is tied to stock performance, which is tied to profitability, you can explain a lot of behavior," Montabon said. "If measuring greenness is difficult, well, then how do you reward greenness? And so from the business side, that's the problem.

"It's also difficult to measure greenness for research purposes," he said.

Montabon's research has been a product of corporate self-reporting because there are no formal green standards. He says the World Research Institute (http://www.wri.org/) and the Global Reporting Initiative (http://www.globalreporting.org/Home) are two organizations that have attempted to standardize measurement of environmentally responsible manufacturing.

But more government-backed standards may be on the way. The European Union recently adopted a directive on waste electrical and electronic equipment (WEEE) with the Restriction of certain Hazardous Substances (RoHS). It bans the use of certain substances in electrical and electronic equipment products placed on the European market after July 2006.

"A lot of governments haven't implemented standardized measures, but they've implemented things like WEEE RoHS," Montabon said. "So the regulations are not going to decrease. We see these European things and we see the Pacific Rim adopt a similar sort of thing, and while it's not standardization of measures, it's putting environmental issues and sustainability right at the forefront of being able to do business."

Montabon is also assessing how much sustainability is at the forefront of an Iowa State education. As part of his work with ISU's Council on Sustainability, he has compiled a list of classes at the university which clearly focus on sustainability or environmental management. His preliminary investigation has found an estimated 100 classes qualify. 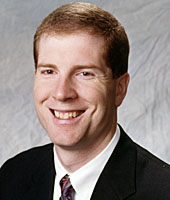 Frank Montabon, an associate professor of operations and supply chain management in ISU's College of Business, contends that greener business practices aren't truly "sustainable" if they can't make money. He has conducted extensive research in the area of environmentally responsible manufacturing, including a 2007 analysis of 45 corporate reports in the study "An Examination of Corporate Reporting, Environmental Management Practices and Firm Performance."

"All of this (sustainability) is not going to happen unless they (businesses) can make a buck and the community likes the changes. So organizations also need to change the business model. That's a big part of the equation when you talk about environmental issues and sustainability."