AMES, Iowa -- A few years after the energy crisis of the 1970s, Americans returned to their gas-guzzling, Btu-busting ways. But Europeans learned their lessons well. Facing increased population density, strained natural resources, higher energy prices and environmental emergencies like Chernobyl, they responded with progressive land use policies and tighter resource restrictions. Their cars got smaller, their mass transit smarter and their buildings greener.

Now Iowa State University is learning some European lessons from a German architect. For the past two years, assistant professor Ulrike Passe has been injecting a healthy dose of European-bred, green design into the ISU architecture curriculum. And as lead faculty on ISU's solar decathlon project, she's extending her expertise to the entire campus community.

A university instructor and practicing architect in Germany since the early 1990s, Passe came to the ISU College of Design's attention after some of her work was published as exemplary of green design and emerging practices. Her research passion is air flow and spatial composition.

"It's a very architectural topic, but it's a neglected topic in terms of energy. We put a lot of energy into just circulating air around inside of our buildings," she said.

"We can use force to move air with a fan. Or we can use gravity and physics -- which can be enhanced by design," she said. "I'm interested in how walls, openings, the widths of openings and the height of openings affect the flow of air."

Passe combined her Berlin architecture schooling with "a very cutting-edge, conceptual artistic education" during study at the Bartlett School of Architecture and Planning in London.

"By that time, Germany had faced some big environmental challenges related to the depletion of resources," she said. "When I was growing up, it was very obvious that the environment was crumbling."

During the 1980s, the Green Party -- which stresses environmentalism through grassroots democracy -- was coming into its own in Germany.

Living in Berlin during the height of German reunification activity, Passe realized that architects have a voice in developing and implementing green policies.

"During the debate about restructuring Berlin, there was a lot of very interesting talk about sustainable communities -- trying to reduce the footprint of an urban development as much as possible. Greening the city, in other words," she said.

"Europe has been working on energy efficiency in buildings for quite some time, thanks to a different energy policy, higher energy costs, and seeing on your front doorstep that things were going very wrong," she said.

"Europe and Germany took care of the existing building infrastructure," she said. "In 2009, it will be mandatory that every building being sold must have its exact energy usage posted. Like miles per gallon for cars."

"There's a strong drive from this new generation to be green. That is really positive," she said.

Green technology, however, is not added to the form after it's designed. It's an integrated design process.

"It just doesn't work to design a form and then add technology to it. The form itself is a result of orientation, how you use the site, how you relate it to solar angles, how the space uses the air and heat of the sun to make systems as small as possible and the space most comfortable," she said.

Thanks to their efforts, Iowa State was one of 20 university teams from four countries selected for the competition to design, build and operate the most attractive, effective and energy-efficient solar-powered house. Construction will begin this fall. In the fall of 2009, the houses will be assembled as a solar village on the National Mall in Washington, D.C.

Iowa State's "Interlock House" will be a free-standing solar-powered dwelling that will generate enough energy for its needs and direct any surplus to the grid. The Interlock House's design uses three primary features to create thermal comfort and energy efficiency:

"The U.S. Department of Energy's Solar Decathlon competition is one of the most prestigious events in the country for green design," Passe said. "It exposes the university and its green design and technology and solar research to the world."

Additional information is online at http://www.solard.iastate.edu/homepage.html. 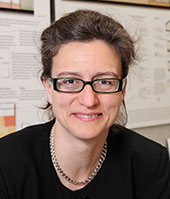 For the past two years, assistant professor Ulrike Passe has been injecting a healthy dose of European-bred, green design into the ISU architecture curriculum. And as lead faculty on ISU's solar decathlon project, she's extending her expertise to the entire campus community.

"There's a strong drive from this new generation to be green. That is really positive."