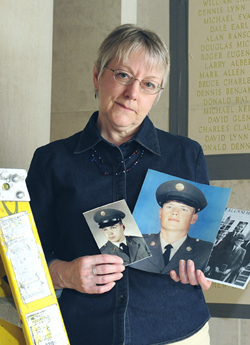 Memorial Union Marketing Director Kathy Svec is quietly passionate about ensuring all who should be memorialized in the Gold Star Hall are. Photo by Bob Elbert.

AMES, Iowa -- There's a reason it's called the Memorial Union at Iowa State University. And Kathy Svec is quietly passionate about ensuring all who should be memorialized are.

The walls of the Gold Star Hall -- the "memorial" in Memorial Union -- are engraved with the names of former students who died while on active combat duty in the U.S. Armed Services. After cross referencing casualty lists with Iowa State alumni rosters, all known names from a war or conflict were added at the same time -- in 1984 (Vietnam and Korea), 1969 (WW II) and 1928 (WW I). Names from Iraq have been temporarily placed on a wooden plaque until the time is right to engrave them in stone.

This year, 20 new names have been engraved. The fallen soldiers, whose combat deaths span nearly 50 years (from 1945 to 1993), will be honored in the Gold Star Hall ceremony on Veterans Day. Sixteen are from Vietnam, two from Korea and one each from World War I and Somalia. This is the third consecutive year that names have been identified and added to the hall, and ceremonies observed.

"These are students who attended Iowa State, but did not graduate," said Svec, Memorial Union marketing director. "Their educational careers were interrupted by the conflict and they dropped out to serve or were drafted. So they didn't show up on the alumni rosters."

Since February, Svec, who describes herself as a "local history buff," has spent part of each day tracking down family and friends, photographs and storylines. She has written to all the people named "Hedges" in the Chicago phonebook and traced pallbearers mentioned in 40-year old obituaries. She enlisted help from small-town librarians, a Class of '64 historian, the nephew of a Korea POW and the Navy buddy of a Vietnam casualty. Big sisters and little sisters. Even a twin brother.

She found true heroes and regular farm boys. Gear heads and Cub Scouts. Class presidents and homecoming kings. A writer, an artist, a musician, a dry wit. Fans of the Beach Boys. A lover of Monopoly. A basketball champ. A descendant of code talkers. And guys who just wanted to learn to fly.

Svec also gathered treasured photographs from loved ones. A boy with his 4-H steer. Siblings in Halloween costumes. A small boy on a pony. A prom picture. A teenager next to his red Mustang. Brothers camping. A fraternity. A track team. A mother with her son in uniform. A skinny soldier with a rifle. The gravestone of a 19-year-old. A small town's memorial flagpole.

From these memories, Svec tenderly crafted each soldier's tribute to be read during the ceremony.

It's impossible to remain detached, she said.

"It's so emotional. I become very involved with these guys and feel like I truly know them," she said.

While looking at a photograph of the lone Seabee in the group of honorees, she comments, "Doesn't he look like just a great guy -- isn't that just a gorgeous smile?

"This is what it's about. Oh gosh, just look at these guys. They were real people, not just names engraved in limestone. They are real people," Svec said with tears in her eyes.

"We want to make them come alive for an hour," she said.

"These people made some decisions," she said. "They answered the call of duty because it was expected of them, because that's the way they were raised -- strong, solid, Iowa kids who took responsibility."

For the families of Vietnam casualties, their loss is 35 years old, and their memories "are more about what their soldier was like when he was alive, " Svec said.

"Most are just so thankful. They appreciate the opportunity to remember their family one more time," she said. "I think it's more of a joyous occasion for them."

A reception with displays of honoree memorabilia follows the ISU ceremony.

"The families have been an incredible resource -- they have opened our eyes to the form that the ceremony could take. They just spontaneously brought their photo albums and medals to share," Svec said.

"It's very moving," Svec said. "You realize how important it is to actively engage the families in preparing for the ceremony."

Svec tells the story of three squad buddies of a Vietnam casualty who showed up for last year's ceremony.

"They told me that they had been out on maneuvers the day that Ricky died. When they got back two or three days later, Ricky was gone. He was just gone. The field ceremony was long over and his body had been taken away. By the time they got back, everything was business as usual," she said.

"Those guys never got to say goodbye to their friend."

The soldier's two brothers had also come to the ceremony. The five went to dinner. They stayed up most of the night talking, looking at pictures their friend and brother had taken in Vietnam.

"The next day, they stopped to see me," Svec said. "And one said, 'This is the best day I've had since I was inducted.' It was an honor to do that for them."

Not only is the Gold Star Hall ceremony meaningful to the families and the friends, it pays tribute to those students of the 1920s who wanted to remember their friends "in a grand fashion," Svec said.

"When they went out to raise money to build the Memorial Union, their pitch was: 'These people gave their lives, you can give $100,'" Svec said.

"We want to be true to that spirit."

20 former students who died while on active combat duty in the U.S. Armed Services will be honored with tributes to their lives tenderly crafted by Kathy Svec. The names of the fallen soldiers -- 16 are from Vietnam, two from Korea and one each from World War I and Somalia -- have been engraved into the walls of the Gold Star Hall, the active war memorial in the union's north entrance.

"This is what it's about. Oh gosh, just look at these guys. They were real people, not just names engraved in limestone. They are real people."

An employee of Nevada Monument blackens a newly sandblasted name in the Gold Star Hall limestone prior to removing the protective stencil. The names of 20 fallen soldiers, spanning nearly 50 years, were added to the walls. Photo by Bob Elbert.