Agriculture and the arts joined at ISU through "Farmscape" play, campus group

AMES, Iowa -- Mary Swander admits that agriculture and the arts don't seem to have much in common. Yet the Iowa State University Distinguished Professor of English has found some similarities between the two -- so many that she's leading an effort to join them together in a new play and related campus group.

An award-winning author, Swander and her English 557: Writing about Environmental Issues class studied the plight of the contemporary Iowa farmer for a class project last fall. Through their research and interviews with current Iowa farmers, they authored a play titled "Farmscape: Documenting the Changing Rural Environment," which was debuted on campus last February.

Because of the play's message, Iowa State's Leopold Center for Sustainable Agriculture provided Swander grant money to have "Farmscape" performed outside of campus. She is currently booking dates with other colleges, universities and small community theaters around the state.

Upon learning about the interest in the play, Leopold Center Distinguished Fellow Fred Kirschenmann also suggested creating a campus group that explores agriculture and the arts more formally. He and Swander drew 40 members to their initial organizational meeting this summer.

The group, which is now called Agarts, continues to grow and will be meeting for a free, public viewing of "Farmscape," on Sunday, Nov. 16, at 7:30 p.m. in the second floor gallery at "Images by Ngaire" in downtown Ames.

Swander says that her students studied docu-dramas -- non-fictional plays based on real events -- while developing their play. The students researched local environmental problems and arrived upon the changing farmscape as a topic for their own docu-drama. They then interviewed people involved with the changing farmscape across Iowa -- shaping their words into dramatic monologues.

"We did interviews and monologues, and then we chopped up the monologues to make a dialogue. There are 10 actors in the play," Swander said. "It creates a chorus of voices -- the sort of David and Goliath situation that's out there right now with small farms and large corporate interests. The whole thing works on irony to create tension, reflecting how farmers look at the current situation differently."

The play is a reader's theater production, with people from local theatre groups reading the character's roles with the aid of some minimal costuming. Among the characters are an agribusiness farmer with 1,700 acres, a woman farmer with two acres of organic vegetables, a man who gave up row cropping and started a winery, a man who lost his farm in the farm crisis and eventually earned a Ph.D., a researcher from Monsanto who is developing genetically modified crops, and a couple on a century farm who started a hog confinement operation to save their farm.

"The main character is a farmer who's lost his farm, so the context for the play is an auction as he sells off his property," Swander said. "And the Mayor of Gilbert took on that role when it was performed at an arts festival in Gilbert. He did a wonderful job and at the end he said, 'You know, that really hit home because I did lose my farm personally and then I went into public service.' So it can't help but touch chords if you've been living in this state for any amount of time."

Swander is currently scheduling the production's tour, which will include stops at Dordt College on Nov. 22, Grinnell College at the end of January, the University of Northern Iowa on March 14, Clinton Community College the first week of April, the Adel Book Festival on May 9, and dates to be determined in Coon Rapids and Elkader. Because of the play's relationship to the plight of the Iowa farmer, the Leopold Center will be sending a staff member to lead a discussion following each performance.

People from as far away as Iowa City and Omaha have also contacted Swander about joining the Agarts group, which is open to the public. She says that the group is now conducting bi-monthly meetings built around related agricultural and artistic topics.

"We had a meeting a couple of week ago, and Fred (Kirschenmann) kept saying, 'Think about ways that the arts can represent, or dramatize, or put forth the current issues in agriculture,'" Swander said. "And you know, I've been a writer forever and have done tons of readings and plays and dramatic events, and everybody I approach about this 'Farmscape' play says they're interested in it. I think that's because it's a grassroots production and poses some of the questions we're wrestling with ourselves."

Swander has future plans to have the play performed throughout the country and in Europe. 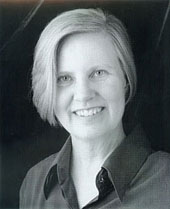 ISU Distinguished Professor of English Mary Swander has found similarities between the agriculture and the arts and is leading an effort to join them together in a new play, "Farmscape," and related campus group. The group, which is now called Agarts, will be meeting for a free, public viewing of the play on Sunday, Nov. 16, at 7:30 p.m. in the second floor gallery at "Images by Ngaire" in downtown Ames.

"It (Farmscape) creates a chorus of voices -- the sort of David and Goliath situation that's out there right now with small farms and large corporate interests. The whole thing works on irony to create tension, reflecting how farmers look at the current situation differently."