AMES, Iowa -- This year's Nobel Prize for chemistry was given to researchers for their work on illuminating living cells that enables scientists and researchers to study how genes, proteins, and entire cells operate.

Stephen Howell, director of the Plant Sciences Institute at Iowa State, developed the process when working with the firefly luciferase gene that illuminates cells in an organism, just as the Nobel-winning research does. At the time Howell and his staff were conducting research at the University of California, San Diego.

"Fundamentally it's the same sort of thing," said Howell. "Both of the technologies allow you to visualize things that are otherwise very difficult to see. It might be a biochemical process. Maybe it's a gene turning on and off."

At the time of its discovery, Howell's research and the picture of a glowing tobacco plant got the attention of the national press, including an interview on NBC's "Today Show" and other national and international media.

While the two technologies do much the same thing, the major difference between them is in how they work.

The technology that was awarded the Nobel Prize uses green fluorescent protein (GFP). It involves incorporating the GFP protein into the living cell and then watching what happens with the use of an ultraviolet light. GFP was developed in 1994.

Howell's 1986 technology takes advantage of the chemiluminescence generating properties of luciferase rather than fluorescence. Luciferase technology does not require using an ultraviolet light as does GFP to see the activity in the cell.

Luciferase allows fireflies to glow and is introduced into other organisms by researchers.

Both of the technologies are competitive and complementary, he said.

"In research we've done over the years here, we've used luciferase and GFP," said Howell of the technologies. "Both of them enable us to visualize, and both are important to our field of research." 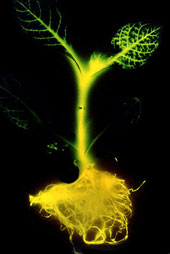 This year's Nobel Prize for chemistry was given to researchers for their work on illuminating living cells. An Iowa State University professor developed something similar more than 20 years ago.