Another 23 teams will program their LEGO robots to win sumo-style matches. And another 14 will show off the educational computer games they developed.

It's all part of the second annual IT-Olympics at Iowa State University. Competition in all three information technology events will be Monday, April 20, from noon to 8 p.m. and Tuesday, April 21, from 8 a.m. to 6 p.m., at Iowa State's Hilton Coliseum. The event is free and open to the public.

Doug Jacobson, a University Professor of electrical and computer engineering at Iowa State and an event organizer, has staged cyber defense competitions for years in the Internet-Scale Event and Attack Generation Environment, a virtual Internet Jacobson developed to study and teach computer security. He says this spring's IT-Olympics field of 37 teams (there are three to 10 students per team) will be the world's biggest for a cyber defense competition.

But that's not something the nine members of the cyber defense team at Valley High School in West Des Moines are thinking about. They're busy setting up a server and tweaking a security firewall.

That could mean some long hours after school. But team members said the IT-Olympics are worth the time.

"I enjoy computers and I'm probably going to be a computer science major next year," said Jefferey Roy, an 18-year-old senior at Valley. "And this definitely covers a lot of stuff that we don't have high school classes for."

It's the competition, for example, that taught the team to build and maintain computer networks.

Matt Tough, an 18-year-old senior at Valley who wants to study math, physics or computer science in college, said the team works hard to learn the technical skills it needs to protect its network from hackers.

"This is something that's obviously important with the way our society is using technology," Tough said. "This is a good learning experience."

This is the third time Cochran has organized a cyber defense team for competition at Iowa State. He makes it happen because this "is an opportunity for Valley students to experience a real-world activity," he said. "And, this gives them some knowledge that they can't get from Valley."

One of those lessons, he said, is that it's very hard to keep hackers out of computers.

Jacobson, who's hoping to grow the IT-Olympics into a national event for high school students, said the competition is very good at teaching technical skills. But it also demonstrates to students that a lot of their peers are interested in computers. And he makes sure it shows students there's still a strong job market in information technology.

Major sponsors of IT-Olympics are Iowa State University, the Iowa Department of Economic Development and the Iowa Math and Science Education Partnership.

Teams of high school students from all over Iowa will compete in the second annual IT-Olympics at Iowa State University. They'll do their best to defend computer networks from hackers, build LEGO robots capable of sumo-style moves and design educational computer games. The competition is April 20-21 at Hilton Coliseum. The event is free and open to the public. 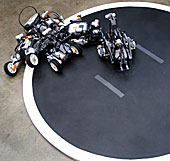 LEGO robots try to push each other out of the sumo ring during last year's IT-Olympics at Iowa State. Photo provided by the IT-Adventures program.

Doug Jacobson, a University Professor of electrical and computer engineering at Iowa State and an IT-Olympics organizer