AMES, Iowa -- For the students in Bridget Belkacemi's landscape architecture studio class at Iowa State University, the creation of a memory care garden for Alzheimer's patients is a learning experience they aren't likely to forget.

For the past three months, the 12 students have worked with staff at the Presbyterian Village in Ackley to design and create a therapeutic garden for the facility's newest wing--the dementia care unit. A garden space with a concrete circular path existed, but the garden had not been completed.

Belkacemi, a lecturer in landscape architecture, was looking for a service-learning or outreach project for her six-credit studio for fifth-year students, when she heard about Presbyterian Village from a colleague.

"Last year my studio retrofitted the Hobo Museum in Britt," said Belkacemi. "This time, I wanted to do a healing garden for a nursing home, something calming that would have a really great impact in a community."

"Breathe seemed like the right word because this type of garden is about stepping away from the hustle and bustle and allowing yourself time to breathe and take in the therapeutic benefits of the garden," she said. "And in Alzheimer's disease, the last thing your brain forgets to do is breathe."

Last fall, she met with Presbyterian Village administrators, who liked her idea and proposed to raise $8,000 for the project. When the class started in January, students created a questionnaire and design checklist for staff. The answers helped guide their choices for various landscape elements and memory triggers.

The concept of memory care gardens started in the 1980s, Belkacemi explained.

"You can sometimes connect with a person in the late stages of Alzheimer's by using something from their childhood as a memory trigger--a song or porch swing, for example," she said. "And because the gardens keep patients more active, they help produce positive responses in the patients."

For the garden design, students carefully chose each element to elicit soothing memories of childhood in a German farming community in Iowa--from a clothesline and hand pump to corn plants and lilacs.

The students created two functional areas within their plan for the 36-foot-by-52-foot space (which includes the 8-foot wide circular sidewalk). One area is a viewing garden, the other a working yard. 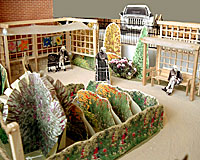 The viewing garden has a front porch area with a shade trellis system, a glider and movable chairs.

"The plants in this section will be ones that attract birds and butterflies. There will be a humming bird feeder and birdhouse in the center," Belkacemi said. "The plants are memory triggers-- hydrangea, lilacs, hollyhocks and delphiniums. They are typical flowers in rural Iowa communities." 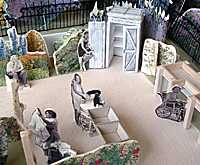 The working yard features a garden shed with tools and plastic watering cans, a wheelchair- accessible planting box, a working hand pump and a clothesline.

"We'll have Iowa fruits and berries to pick, like thornless raspberries, elderberries and wild plum. There will even be a couple of corn and soybean plants for the farmers," Belkacemi said. "And a wheelchair-accessible planter will contain the bulk of the vegetable garden. Tomatoes, string beans, beets, and peas are just some of the vegetables to be included."

Under the building's portico, students are crafting a transitional zone with benches and shade where patients can don gardening hats and gloves while adjusting their eyes to the brighter outdoor light. And, by taking advantage of a hillside and planting weeping plants (weeping willow, spirea and forsythia), they can create an enclosed space for the entire garden.

Presbyterian Village staff have been involved in the design throughout the process.

"Staff are really excited about the garden because it will feel more like home for the patients who are farm wives and town ladies and were avid gardeners," Belkacemi said.

During the weekend of April 18, Belkacemi worked with Ackley volunteers and FFA students to prepare the garden space by amending the clay soil--digging it up, loosening it to create air space, and mixing in mulch and compost. During the weekends of April 25 and May 2, students from the class will plant the garden and install the trellis, shed and other elements.

"Not only are we learning more about plant material, we're learning in a human-garden sense," said Mary Bumgardner, St. Paul, Minn. "You really have to think of the significance of a plant's memory triggers, the edible qualities, the safety issues. It's been very interesting."

The service project at the core of the Breathe Studio attracted the students to the class, according to Angela Roberson, a senior from Mesa, Ariz.

"One thing I found appealing that has become more engrossing during the class was the idea that we're helping and what we're doing is going to make a difference in some way. We're taking an active role; I think that's kind of cool," she said.

"We knew we were signing up for a healing garden class," Roberson said. "But I've honestly been pleasantly surprised. This course has definitely surpassed my expectations."

For the past three months, students in Bridget Belkacemi's landscape architecture studio class at Iowa State University worked with staff at the Presbyterian Village in Ackley to design and create a therapeutic garden for the facility's newest wing--the dementia care unit. Students carefully chose each element to elicit soothing memories of childhood in a German farming community in Iowa--from a clothesline and hand pump to corn plants and lilacs.

We knew we were signing up for a healing garden class. But I've honestly been pleasantly surprised. This course has definitely surpassed my expectations."