AMES, Iowa -- The construction fences are down. The crane is gone. The piles of dirt have disappeared. And 20 feet above ground, a roof is in full bloom. Iowa State University's first green roof atop the College of Design's King Pavilion is hard at work, reducing stormwater runoff, moderating the building's temperature and converting carbon dioxide to oxygen.

The roof is one of several green components in the new $6.6 million addition that will provide much-needed instructional studio space for design students beginning the first day of classes, Monday, Aug. 24.

The King Pavilion is Iowa State's first new green structure on campus. Other green features include windows that provide natural light and ventilation, and wall insulation made from recycled denim. The 23,735-gross-square-foot facility was designed under the U.S. Green Building Council's Leadership in Energy and Environmental Design (LEED) guidelines to meet the highest green building and performance measurements. 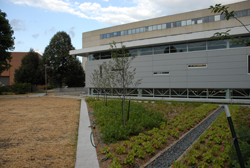 As a result, the building and the surrounding grounds will serve as a living laboratory for the study of sustainable design practices, and advance the principles of environmental stewardship within the college and university.

"The King Pavilion is about walking the talk," said Luis Rico-Gutierrez, dean of design. "As we talk to our design students about the complexities of sustainability, we will be able to point to this facility and use it as an example of how it is done."

Located on the north side of the design building, the King Pavilion features a central, two-story "forum" surrounded by instructional studios, previously housed across the street in the 75-year-old Armory Building. 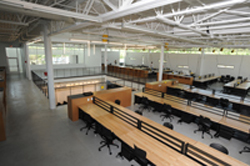 The new facility will be home to freshmen in the college's Core Design program as well as upperclassmen in professional degree programs. It was Dean Emeritus Mark Engelbrecht's dream that students from all design programs be integrated in the same work area, creating opportunities for interaction and collaboration.

Designed by RDG Planning & Design, Des Moines, the construction of the King Pavilion began in April 2008 and was completed in June 2009. Kevin Nordmeyer was lead designer. (He has since become director of the Iowa Energy Center.) The facility showcases several green and energy-saving techniques.

• Green roof
The living roof is sown with 20 varieties of hardy, colorful plants (including 14 varieties of sedum) in a gravel-sand medium, underpinned with three layers of substrate materials that control moisture flow and protect the roof membrane, according to project manager Kerry Dixon-Fox, an architect with ISU facilities planning and management. 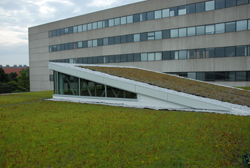 "This type of roof should prevent 80 percent of rain and melted snow from flowing to the storm sewers as runoff," Dixon-Fox said.

• Stormwater management
The site around the building was developed to demonstrate water-retention techniques. Percolation will allow the water to seep back into the soils instead of being piped directly into the storm sewers. 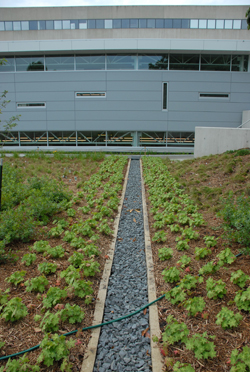 And, detention cells under permeable paved areas and at the base of the triangular hill on the northwest corner of the pavilion will slow surface rainwater flow into local storm sewers. The hill features native and native-hybrid perennial plants, and includes species not planted elsewhere on campus.

• Water conservation
To help reduce water consumption, restrooms in the King Pavilion have dual-flush toilets, the first installed on the Iowa State campus. The two-button flushing system permits users to manually select the water volume of each flush - less for liquid waste, more for solid.

• Natural ventilation
A significant portion of the new building will be ventilated naturally with operable windows. Because the King Pavilion will not be used during the summer, it will not be air conditioned, but will have moving air and dehumidification. Motion and carbon dioxide sensors in the building will switch blowers on automatically to circulate air when they detect occupants in the studios.

"I was in the building on the hottest day we've had this summer," Nordmeyer said. "The temperature was in the upper 90s with high humidity and high dew point. The building was very comfortable. The systems are working as intended."

• Daylighting
Clerestory windows on both levels of the building as well as the doghouse (the sloped section of roof above the central forum space) reduce the need for artificial lighting. Sensors throughout the facility will monitor occupancy and light levels and automatically turn lights on and off as needed.

Photo by Bob Elbert.
"The daylighting was a significant energy-savings strategy," Nordmeyer said. "It's an exceptionally daylighted facility, with no need for artificial lights throughout the day."

• Construction materials
To meet LEED requirements, the building materials used had to be partially recycled materials from no farther than a 500-mile radius around Ames. The King Pavilion uses 75 percent recycled steel, rock bedding from Missouri and recycled blue jean insulation. The building is the first on campus to insulate with the 100 percent cotton product.

During construction, 90 percent of all waste generated was recycled.

The green practices applied in the King Pavilion are already influencing other campus projects. Two buildings under construction--the Biorenewables Research Laboratory and the new chemistry facility--are incorporating on-site cistern retention for rainwater recycling. As a result, Iowa State is leading the state of Iowa in setting new standards for using reclaimed water in buildings.

The King Pavilion will be dedicated at 5:15 p.m. Monday, Aug. 24, in the Lyle E. Lightfoot Forum of the College of Design. A reception and tours of the facility will follow at 6 p.m. Both events are free and open to the public.

Lead donor Steve King, Maple Plain, Minn., will be among those making brief remarks during the dedication. The addition is named for King and his late wife, Barb, who made a commitment of $1.5 million for the facility. The Kings graduated from Iowa State in 1968 and founded Landscape Structures Inc., an innovative children's play equipment company that is an industry leader in safe, sustainable design practices.

"Sustainable design has been part of our work for many years -- our company's mission statement talks about honoring our environment," King said. "When Barb and I discussed our commitment to the new addition, we agreed that if we became involved, we wanted it to be as green as possible.

"We want this facility to stand as an example of good stewardship, not only for Iowa State, but also for other public universities. If Iowa State can do it, why can't everyone?" King said.

"Iowa State was very good to us," King said. "Barb and I saw our commitment to this project as a way to give back to the college and university."

The College of Design raised $3.6 million in private support for the project. A total of 2,022 individual donors contributed.

These gifts are part of "Campaign Iowa State: With Pride and Purpose," the university's $800 million fundraising effort. More than $700 million in gifts and future commitments for facilities and student, faculty and programmatic support have been made to Campaign Iowa State.

The King Pavilion, Iowa State's first new green structure, will be dedicated at 5:15 p.m. Monday, Aug. 24, in the Lyle E. Lightfoot Forum of the College of Design. A reception and tours of the facility will follow at 6 p.m. Both events are free and open to the public. Students will begin classes in the new addition on Aug. 24. The building and grounds will serve as a living laboratory for the study of sustainable design practices.

"We want this facility to stand as an example of good stewardship, not only for Iowa State, but also for other public universities."

In the United States and in several other countries, LEED (Leadership in Energy and Environmental Design) certification is the recognized standard for measuring building sustainability. The LEED green building rating system - developed and administered by the U.S. Green Building Council - promotes design and construction practices that increase profitability while reducing the negative environmental impacts of buildings and improving occupant health and well-being.

The LEED rating system offers four certification levels for new construction - Certified, Silver, Gold and Platinum - that correspond to the number of credits accrued in five green design categories: sustainable sites, water efficiency, energy and atmosphere, materials and resources, and indoor air quality. The College of Design has applied for a LEED Platinum rating for the King Pavilion.