And there's a lot of raw power in those racks.

Aluru, the Ross Martin Mehl and Marylyne Munas Mehl Professor of Computer Engineering and the leader of the Cystorm project, said the new machine also scores high on a more realistic test of a supercomputer's actual performance: 15.44 trillion calculations per second compared to CyBlue's 4.7 trillion per second. That measure makes Cystorm 3.3 times more powerful than CyBlue.

Those performance numbers, however, do not earn Cystorm a spot on the TOP500 list of the world's fastest supercomputers. (When CyBlue went online three years ago, it was the 99th most powerful supercomputer on the list.)

"Cystorm is going to be very good for data-intensive research projects," Aluru said. "The capabilities of Cystorm will help Iowa State researchers do new, pioneering research in their fields."

The supercomputer is targeted for work in materials science, power systems and systems biology.

"These research efforts will lead to significant advances in the penetration of high performance computing technology," says a summary of the Cystorm project. "The project will bring together multiple departments and research centers at Iowa State University and further enrich interdisciplinary culture and training opportunities."

The researchers purchased the computer with a $719,000 grant from the National Science Foundation, $400,000 from Iowa State colleges, departments and researchers, and a $200,000 equipment donation from Sun Microsystems.

Because of Cystorm, the computer company will designate Iowa State a Sun Microsystems Center of Excellence for Engineering Informatics and Systems Biology.

While Cystorm is much more powerful than CyBlue, Aluru said Iowa State's first supercomputer will still be used by researchers across campus.

"CyBlue will still be around," Aluru said. "Researchers will use both systems to solve problems. Both systems enhance the research capabilities of Iowa State." 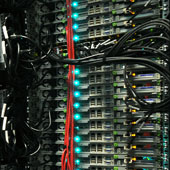 These are just a few of Cystorm's 3,200 computer processor cores. Photo by Bob Elbert.

Cystorm, Iowa State University's second supercomputer, is capable of a peak performance of 28.16 trillion calculations per second. It will help Iowa State researchers advance their work in materials science, power systems and systems biology. It is also earning Iowa State recognition as a Sun Microsystems Center of Excellence in Engineering Informatics and Systems Biology.

"Cystorm is going to be very good for data-intensive research projects. The capabilities of Cystorm will help Iowa State researchers do new, pioneering research in their fields."