AMES, Iowa -- A recent study by the U.S. Centers for Disease Control and Prevention, Emory University and Andrews University reported that adult video gamers suffer higher levels of depression and weigh more than non-gamers. In the study of 562 adults (ages 19 to 90) from the Seattle-Tacoma, Wash. area, researchers also found "measurable correlations between video game playing and health risks."

But those results reflect subjects playing traditional, sedentary video games. Today's activity-promoting video games -- such as Wii Fit™, EA SPORTS Active™ and Dance Dance Revolution™ -- may be changing all that. So says Lorraine Lanningham-Foster, an Iowa State University assistant professor of food science and human nutrition, who is conducting research on the measurable health benefits of the more active games.

Lanningham-Foster was lead author of a study titled "Activity-Promoting Video Games and Increased Energy Expenditure," which was published in the June issue of The Journal of Pediatrics. The research on 22 children, ages 10 to 14, found that a child who plays eight hours of video games a week will burn 1,990 calories (an average of 284 per day) through Nintendo Wii Boxing -- or three times as many as the 652 calories they'd burn playing a traditional sedentary video game.

"What I wanted to demonstrate was how many more calories your body can burn by playing Wii as opposed to playing a traditional video game -- and it's quite a lot," said Lanningham-Foster, who conducted the National Institutes of Health-funded research while she was employed in the Endocrine Research Unit at the Mayo Clinic in Rochester, Minn.

"Even with the Wii boxing game in the training mode, we can get people to basically triple -- and sometimes more -- the number of calories they burn, relative to if they were playing a more traditional video game," she said.

Because Wii games allow for multiple players, Lanningham-Foster is now studying the health benefits for families who play the games together at home. She began screening potential subjects this month for the study, which is funded by ISU's Nutrition and Wellness Research Center.

The ISU researcher will ask the families to play video games on the Wii system in their homes for two weeks. She'll then analyze the amount of movement and the number of calories burned by each family member to determine the game's overall health benefit.

"What we do is some high-precision measurements of their [family members'] energy expenditure, using devices they wear to monitor physical activity and through a technique called doubly-labeled water [enriching water with more hydrogen and oxygen than what's normally found in nature] -- which is really the gold standard method in the field -- to measure how many calories they burn," she said. "And then I give them a Nintendo Wii and certain games to play -- Wii Fit, which has been out now for more than a year and was one of the first that really made people more aware of their body weight and physical activity; and EA Active, which is more designed for adults as a way to get them in the workout mode in their homes."

While the results aren't yet in, Lanningham-Foster already sees the games providing families some low-cost home fitness options.

Her primary research is also focused on prevention and intervention of pediatric obesity and she says the new video games are a fun way for kids to become more active.

"Kids don't think like adults do - that they need to go to the gym and work out and be healthier," she said. "I don't think those concepts really come into play. If they're having fun and they're moving [by playing activity-promoting video games], that's the most that they want to do."

Lanningham-Foster hopes to complete her current study and compile results within the year. 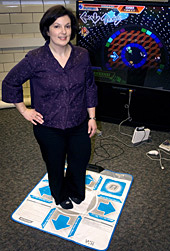 Lorraine Lanningham-Foster, an ISU assistant professor of food science and human nutrition, is conducting research on the measurable health benefits of the more active games -- such as Wii Fit™, EA SPORTS Active™ and Dance Dance Revolution™.

"What I wanted to demonstrate was how many more calories your body can burn by playing Wii as opposed to playing a traditional video game -- and it's quite a lot."