AMES, Iowa - Researchers at Iowa State University and the U.S. Department of Energy's Ames Laboratory have won two 2009 R&D 100 Awards, the editors of R&D Magazine announced today. The awards, presented annually since 1963, salute the 100 most technologically significant products introduced into the marketplace over the past year. The Chicago Tribune has called the R&D 100 Awards the "Oscars of Invention."

"Iowa State University and the Ames Laboratory are very proud of our record of achievement in scientific discovery and in putting those discoveries to work," said Iowa State University President Gregory Geoffroy. "The R&D 100 Award is an important recognition of that work, and we are thrilled to have two more of these very prestigious awards added to the 32 total that Iowa State and the Ames Lab have earned since 1990. This is a tremendous recognition of the talent of our faculty, staff and students, and we congratulate our newest R&D Award winners."

The awards go to:

The special biodiesel they developed, now being commercialized as Mycofuel™, is made from lignocellulosic biomass. The process involves treating switchgrass, corn stover or forestry wastes with ammonia and naturally occurring white-rot fungi to degrade the cellulose. The resulting sugars are used to grow a different, fat filamentous fungi - mold that's about 60 percent oil. The oil is released using an ultrasonic treatment, which causes the fungal cells to explode. The oil is then recovered by extraction with an improved organic solvent system. A catalyst - along with some added ethanol or methanol - aids in rapid transformation of the oil into a biodiesel fuel. A byproduct of the leftover fungal biomass can be used as a high-protein animal feed. The water can be reused in the fermentation process.

"Biodiesel production from traditional oil-rich crops is limited by land availability, climate, and environmental and social issues regarding the use of feed and food crops for fuel," Van Leeuwen said. "This method of producing biodiesel is green, sustainable and doesn't compete with food crops."

This marks the second year in a row that Van Leeuwen has received an R&D 100 Award. Van Leeuwen (along with Anthony Pometto III, a former ISU professor of food science and human nutrition; Samir Khanal, a former ISU environmental engineering research assistant professor, and graduate student Mary Rasmussen) received a 2008 R&D 100 Award for a project to improve efficiency of the corn-to-ethanol conversion process using a different fungal process.
And in May, Van Leeuwen, Beattie, and other team members accepted the Grand Prize for University Research from the American Academy of Environmental Research for biofuel research very similar to the R&D award-winning process. In the previous effort, yeast was used instead of the second-stage mold.

"The essential change is the organism," Van Leeuwen added. "The improvement in using the mold is more profound in that separation and harvesting is much easier, and thereby, we can also do the conversion of the oil to biodiesel more simply." 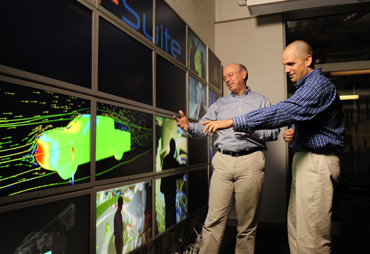 Lead developers Mark Bryden and Doug McCorkle say the software enables engineers to review and revise proposed designs more quickly, more efficiently and at a lower cost than ever before by integrating different types of engineering data into one virtual environment. Bryden is director of Ames Lab's Simulation, Modeling and Decision Science program and an associate professor of mechanical engineering at Iowa State. McCorkle is an associate scientist with both Ames Lab and ISU's Virtual Reality Applications Center. Co-developers of the software include Reaction Engineering International, Salt Lake City; and the U.S. Department of Energy's National Energy Technology Laboratory, Morgantown, W.Va.

The VE-PSI software application combines information about process simulation - data and models about chemical, physical and biological processes - with computer-aided design drawings and fluid dynamics data to create a comprehensive, real-time display of power plant designs. In the interactive virtual environment, engineers can analyze multiple aspects of a proposed power plant at the same time with the aim of optimizing the overall system.

"The goal of VE-PSI is to create an integrated engineering design environment that links together detailed models, process simulations, data and graphics. This enables the engineers to understand overall plant performance and can enable the creative 'what if?' thinking needed to address today's challenging energy needs," Bryden said.

The 2009 R&D 100 Award marks the second for Bryden and McCorkle, who - along with colleague Gerrick Bivins - received a 2006 R&D 100 Award for another software tool.

"This award recognizes a great example of the kind of collaborative work that we do at the Ames Laboratory. The VE-PSI team has brought together advanced knowledge, a vision of how to solve a real problem, and the determination to bring it to reality," said Alex King, Ames Laboratory director. "The end result makes some very daunting computational problems look easy, and it will have applications that contribute to energy efficiency and carbon dioxide reduction across a huge range of different industries. We are all feeling some pride in this."

The 2009 R&D 100 Award winners are listed online at www.rdmag.com. They'll also be honored at a Nov. 12 banquet at the Renaissance Orlando Hotel at SeaWorld in Florida. 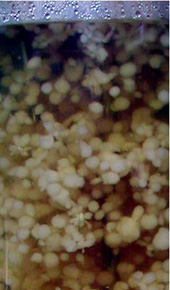 Detail of fungal growth in pellet form during the biodiesel process. 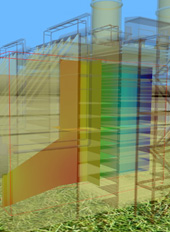 VE-PSI combines different types of engineering data to illustrate power plant designs in a virtual environment. This is a detailed look at a heat recovery steam generator.