AMES, Iowa - A 7 foot 9 3/8 inch parsley plant grown by an Iowa State University researcher is the largest ever in the world, and the grower is now waiting for the Guinness Book of World Records to recognize the feat.


David Brenner, a plant germplasm curator working for ISU's agronomy department, wasn't trying to set a record when he planted the parsley last year, but he knew that the old record was within reach. 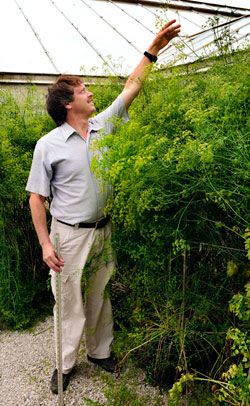 "I knew the record was attainable, so I was keeping my eye on what the plants were doing," he said.

Brenner planted the parsley seeds in March 2008, and closely watched the plants in case they showed promise. When he dug the plants up last fall to move them into a greenhouse for the winter, he was amazed by the growth.

Parsley is a biennial plant, meaning that it takes two years to reach maturity.

"These were the biggest parsley roots that I'd ever seen," he said. "I think that's what provided the strength to grow so tall this spring."

During most of the winter the parsley didn't look like a record breaker to Brenner.

"Almost all winter, it was cool in our greenhouse and it (parsley) looked like something you'd buy in the supermarket," he said.

"I realized in May that they were getting about the size of the record, so I e-mailed Guinness," said Brenner.

Even though his parsley is clearly taller than the current record, Brenner has to wait to see if Guinness will recognize his plants.

"There are lots and lots of rules about how to get them measured and other things, so I have to wait to see what they say," Brenner said.

Brenner, who held the largest amaranth record for a few years starting in 2004, knows that he may not hold the mark for long.

"I don't think we are at the biological limits of this species," he said. "Another person could come along and beat me out."

The parsley plants were grown by Brenner as part of his job at the North Central Regional Plant Introduction Station (NCRPIS), run jointly by Iowa State University and the United States Department of Agriculture as part of the U.S. Plant Germplasm System.

Brenner is responsible for maintaining parsley and other seeds from all over the world in the station's seed bank including 12 types of plants comprising more than 8,000 varieties.

When the seed inventory of any certain variety or its germination gets low, Brenner and his staff grow the plants at the station, characterize their traits, harvest the seeds and store them in the NCRPIS cold storage facility. These are sent to researchers around the world.

The seeds of the record-breaking parsley plant, known as PI 507966, were first collected from Hungary in 1983.

These were the biggest parsley roots that I'd ever seen. I think that's what provided the strength to grow so tall this spring.