6-15-09 Update: Iowa State's Mini Baja Team finished 18th of 120 competitors during an international competition for off-road racers June 11-14 in Burlington, Wis. The competition for student-designed and student-built, Baja-style racers was sponsored by SAE, the Society of Automotive Engineers. Iowa State's team finished ninth in the competition's big event, a four-hour endurance race. Waylon Walker, a junior from Morning Sun who's studying mechanical engineering and is the team's assistant project director, said another team's car flipping the Iowa State car in the endurance race, a bent throttle pedal and some other problems kept the team from reaching its goal of a top-10 overall finish. Even so, "It was a good week for us," Walker said. "We made a lot of improvements this year. We had a faster car, but the competition was a little better, too."

The international competition for student-designed and student-built off-road racers is sponsored by SAE, the Society of Automotive Engineers. It tests the students and their cars in design, cost, maneuverability, acceleration, traction, a hitch pull, a mud bog race and a four-hour endurance race.

Well, the team worked through the spring semester and was able to check off the first two of those major goals.

The team had its No. 74 car far enough along to put it on display at the College of Engineering's VEISHEA exhibit on central campus.

And, Alex Brimeyer, a senior from Dubuque who's majoring in mechanical engineering and is the Baja Team's project director, said the team has trimmed the car down to a lean 386 pounds.

Now what about a top-10 finish?

"We got those first two done and I feel confident we can place in the top 10 and meet all of our goals," Brimeyer said.

Stop by the team's campus shop to see the $12,000 car -- it's sponsored by Caterpillar Inc., Polaris Industries Inc., Iowa Laser Technology Inc., Fisher and the Engineering Student Council -- and other team members point out a few more reasons for optimism.

Shane Pearson, a senior from Spencer who's majoring in mechanical engineering, said the car is about 100 pounds lighter than last year's 16th-place car. The team was able to shave 20 pounds off the gearbox alone.

That's because the students decided the car really doesn't need low or reverse gears to be competitive, Pearson said. And so, as part of their senior design project, team members Jon Howard and Nick Heine designed a simpler, lighter, single-speed gearbox for the team.

Chase Schuette, a junior from Owatonna, Minn., who's studying mechanical engineering, said the team also designed a new suspension that's lighter and features new geometries and components. But he said it will still handle all the bumps and jumps of off-road racing.

And, best of all, the students said the car will get the most out of the 10-horsepower Briggs & Stratton engine that all teams are required to use.

"This car is optimized much more than last year's car," Schuette said.

You don't have to take his word for it. Schuette said the team has the data and calculations to back up his performance claims.

The team hopes all the calculated changes translate into strong and reliable performance, particularly in the competition's four-hour endurance race. The event is worth 40 percent of the team's score. Last year's car completed 34 laps of a muddy course, good enough for 10th in the event and good enough to push the car inside the top 20 overall.

Pearson, who directed last year's Baja team, is expecting more of the same this year. 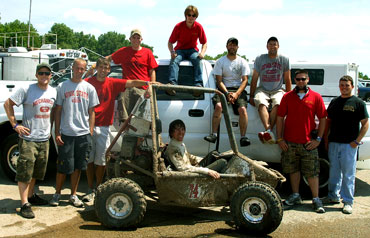 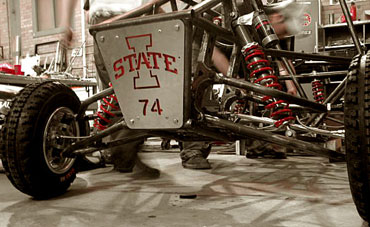 Iowa State's Mini Baja Team is working to improve on last year's 16th-place finish in a contest sponsored by SAE, the Society of Automotive Engineers. Team members think a lighter, simpler off-road racer could help the team move into the top 10. The contest features student-designed and student-built race cars from across the country and around the world.

"We got those first two done and I feel confident we can place in the top 10 and meet all of our goals.

Alex Brimeyer, a senior from Dubuque who's majoring in mechanical engineering and is the Baja Team's project director

Shane Pearson, a senior from Spencer who's majoring in mechanical engineering,

Every member of Iowa State's Mini Baja Team is majoring in mechanical engineering: