AMES, Iowa -- Our memories play tricks on all of us, sometimes preventing us from remembering important details. But when that happens to an eyewitness in a criminal case, Gary Wells says it could be a matter of life and death for the identified suspect.

That's why Wells, a Distinguished Professor of psychology at Iowa State University who developed the dominant theory of how mistaken identifications occur, has begun work on two new studies to explore the thought processes of eyewitnesses when their memory fails as they still try to identify the perpetrator of a crime.

"We've reached a point where to make more advances [in eyewitness identification accuracy], we've got to understand theoretically more of these mistakes," said Wells, who was featured on CBS News' "60 Minutes" earlier this year for his previous eyewitness misidentification research. "That's because we can improve things [in police procedures], but if we're going to improve them even further -- which is the goal -- we need to develop a better theoretical understanding of what's going on."

Wells is in the first year of a four-year study funded by a National Science Foundation (NSF) grant to examine what happens when the witness to a crime tries to identify a perpetrator after his or her memory has failed. Researchers are gathering pilot data from Iowa State students, but they plan to extend their sample beyond campus to possibly include subjects gathered in an airport.

Six experiments are underway, first to determine how primary memory works when it's successful, and then what happens when secondary memory kicks in.

"Instead of the person sort of bailing out when memory fails and saying 'Gee, I don't know' or 'I guess I'm not going to identify anyone,' secondary processes kick in," Wells said. "And rather than the primary processes, which are automatic, these secondary processes require more thinking. We call them deliberative. People tend to be more conscious of these. They're engaged in a process of reasoning and they tend to be more verbal. So people tend to articulate, we believe, these processes -- and they tend to be the dangerous ones [in terms of misidentification]."

The first experiment will gather baseline data when eyewitnesses are able to easily identify the correct perpetrator to a simulated crime. The other five experiments then force recognition to fail either by altering the initial eyewitness experience, delaying the testing, creating memory interference through the use of additional pictures in the lineup, or taxing the retrieval of memory by altering the images.

"We attempt to make recognition -- this sort of 'Aha! That's the guy' experience -- fail," Wells said. "And by doing it in these various ways, we can then study how it fails and hopefully why the subjects nevertheless attempt to make an identification."

He also is the lead researcher on another study -- funded through private contributors and supported by The Innocence Project in New York, The American Judicature Society, The Police Foundation in Washington, D.C. and the Center for Modern Forensics Practices at John Jay College in New York City -- that is gathering data from real eyewitnesses to serious crimes as they attempt to indentify perpetrators through photo lineups. Wells said data is being collected through police departments in Tucson, Ariz., and will soon begin in San Diego and Austin, Texas.

The study, which Wells says is the first of its kind in this setting, provides eyewitnesses a laptop that takes them through the photo lineup procedure without police assistance. The laptop will determine whether eyewitnesses will be shown photos one at a time, or all at once on the same screen. It will also document their actions as they go through the identification process.

"We want to find out which works best: for the witness to see all people [photos] at once, which we believe is a problem; or for them to see them one at a time and have to make a decision on each one before getting to the next," Wells said. "One of the nice things about the laptop administering these lineups is that we will be able to know exactly how long they'll be looking at each picture. We'll know how long it takes them to make an identification. And, of course, we'll have clean records of exactly what they did."

Wells estimates it will take approximately four years to complete data-collection in this study. And he emphasizes it's not designed to diminish the value of eyewitness identifications, but rather make them more reliable.

"We know we have a real problem," Wells said. "There are now 260 or so exonerations based on forensic DNA testing and three out of every four of those are cases of mistaken eyewitness identifications." 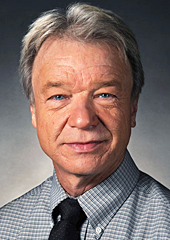 Gary Wells, a Distinguished Professor of psychology at Iowa State, has begun work on two new studies to explore the thought processes of eyewitnesses when their memory fails as they still try to identify the perpetrator of a crime.

"We know we have a real problem. There are now 260 or so exonerations based on forensic DNA testing and three out of every four of those are cases of mistaken eyewitness identifications."