Ejeta's presentation, "Revitalizing Agricultural Research for Global Food Security," will be at 8 p.m. in the Memorial Union Sun Room. A reception and student poster competition on world food issues will be at 7 p.m. in the South Ballroom. All events are free and open to the public.

Ejeta will receive the World Food Prize in Des Moines on Thursday, Oct. 15. He is being honored for his development of sorghum hybrids that are resistant to drought and the devastating Striga weed. The hybrids have dramatically increased the production and availability of one of the world's five principal grains and enhanced the food supply of hundreds of millions of people in sub-Saharan Africa.

Born in rural Ethiopia in 1950, Ejeta grew up in a one-room thatched hut with a mud floor. Because of his mother's deep belief in education and her struggle to provide her son with access to local teachers and schools, Ejeta achieved high academic standing and attended college. In 1973, he earned his bachelor's degree in plant science. The following year, he was given the opportunity to study with a renowned sorghum researcher, John Axtell, at Purdue University, where he earned his doctoral degree in plant breeding and genetics.

As a sorghum researcher at the International Crops Research Institute for the Semi-Arid Tropics in Sudan, Ejeta developed the first hybrid sorghum varieties for Africa that were drought-tolerant and high yielding. Because sorghum was so important to the local diet, and dryland agriculture in Sudan had such vast potential, his hybrids brought dramatic gains in crop productivity and catalyzed the initiation of a commercial sorghum seed industry in the country. Farmers widely and rapidly accepted Ejeta's hybrid, which had yields more than 150 percent greater than local sorghum. By 1999, one million acres had been harvested and fed to millions of Sudanese.

Ejeta's scientific breakthroughs in breeding drought-tolerant and Striga-resistant sorghum have been combined with his persistent efforts to foster economic development and to empower subsistence farmers through the creation of agricultural enterprises in rural Africa. In addition, by partnering with leaders and farmers across sub-Saharan Africa and educational institutions throughout the world, Ejeta has personally trained and inspired a new generation of African agricultural scientists who are carrying forth his work.

The Norman Borlaug annual lecture is named for the Cresco, Iowa, native and agronomist whose discoveries sparked the Green Revolution. Borlaug, who died Sept. 12 at the age of 95, received the Nobel Peace Prize for his international work in wheat research and production, which has saved millions of lives. He is the founder of the World Food Prize, which annually recognizes the achievements of individuals who have advanced human development by improving the quality, quantity or availability of food in the world. Iowa State University created this lecture series to be held annually in conjunction with World Food Prize events.

The Norman Borlaug Lecture is coordinated by Iowa State University's Nutritional Sciences Council and funded by the University Committee on Lectures (funded by the Government of the Student Body). The poster competition is sponsored by the colleges of Agriculture and Life Sciences, Human Sciences, and the Liberal Arts and Sciences. Additional information is available online at (http://www.lectures.iastate.edu/). 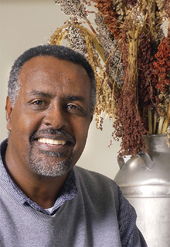