AMES, Iowa -- Paul Gigot, the Pulitzer Prize-winning editorial page editor and vice president of The Wall Street Journal, will speak at Iowa State University on Tuesday, Sept. 21. His talk, "The Future of Opinion Journalism," will be at 8 p.m. in Stephens Auditorium. The talk is free and open to the public.

Gigot will share lessons he learned from Iowa State journalism alumnus Bob Bartley. The longtime editorial page editor of the Wall Street Journal, Bartley won a Pulitzer Prize and was honored with the Presidential Medal of Freedom as "one of the most influential journalists in American history." Bartley, who grew up in Ames, began his career as editor of the Iowa State Daily.

Gigot has been in his current position since 2001. He is responsible for the newspaper's editorials, op-ed articles and Leisure and Arts criticism, and directs the editorial pages of the Journal's Asian and European editions and the OpinionJournal.com website. He also hosts the weekly half-hour news program "The Journal Editorial Report" on the Fox News Channel.

Gigot joined the Journal in 1980 as a reporter in Chicago, and in 1982 became the newspaper's Asia correspondent, based in Hong Kong. He was named the first editorial page editor of The Asian Wall Street Journal in 1984. In 1987, Gigot was assigned to Washington, where he contributed editorials and a weekly column on politics, "Potomac Watch." He won the Pulitzer Prize in 2000 for commentary.

A frequent guest on television programs such as "Meet the Press," Gigot was the weekly partner of Mark Shields on PBS's "NewsHour with Jim Lehrer" for eight years.

Gigot's lecture is cosponsored by the Chamberlin Lecture Fund, the Greenlee School of Journalism and Communication, and the Committee on Lectures, which is funded by the Government of the Student Body. More information on ISU lectures is available at http://www.lectures.iastate.edu, or by calling (515) 294-9935. 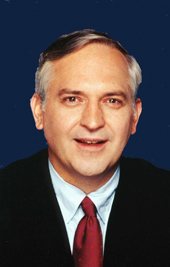 "The Future of Opinion Journalism"