AMES - By planting switchgrass and using certain agronomic practices, farmers can significantly reduce the amount of nitrogen and nitrates that leach into the soil, according to Iowa State University research.

Matt Helmers, associate professor of agricultural and biosystems engineering, and Antonio Mallarino, professor of agronomy, have been studying the amount of nitrates that pass through soil into tiling systems from several different types of crops and fertilizer treatments for the past three summers.

The research is funded by the Iowa Department of Agriculture and Land Stewardship and Iowa State's Leopold Center for Sustainable Agriculture.

They found that certain practices can minimize the amount of nitrogen and nitrates that leach from the field into the drainage tiles.

"One of the biggest things we found is that when alternative biomass sources like switchgrass are grown, even when they use fertilizer, we see dramatically lower nitrate concentrations (in the drainage water)," said Helmers.

Other fields tested systems that rotate corn and soybeans, and others looked at switchgrass plots that received nitrogen fertilizer.

The results showed that fields planted in continuous corn and treated with fertilizer had the most amount of nitrates leach below the crop root zone into the tile system.

The fields with the least amount of nitrates that leached through the soil were planted in switchgrass and treated with fertilizer or manure.

Helmers says that while switchgrass allows less nitrogen to leach into the soil, farmers need reason plant it.

"Right now, there is not necessarily an economic market for (switchgrass)," said Helmers.

"What we're trying to do is evaluate what might be the environmental benefits of that type of land use," he said. "I think that may be able to inform future policy.

"If we pursue a strategy for additional biofuels from various biomass feedstocks, we need to know what the environmental impacts of those different feedstocks are, because that may play into federal policy," Helmers said.

"If there is enough societal benefit and water quality benefit from growing switchgrass on these soils, there may be potential incentives for producers to grow (switchgrass)," he said.

Helmers estimates that at least a third and possibly as much as half of all farmland in Iowa use tile systems to drain excess water from the fields.

Nitrates that leach into the soil can affect Iowa communities that depend on the rivers for clean drinking water, Helmers says.

Nitrates that leach into the soil and are carried downstream are believed to contribute to a dead zone in the Gulf of Mexico where few plants or animals survive.

"We do frequently get questions about what is the nitrate level leaching from grassland systems compared to corn and soybean," said Helmers.

One of the biggest things we found is that when alternative biomass sources like switchgrass are grown, even when they use fertilizer, we see dramatically lower nitrate concentrations (in the drainage water). 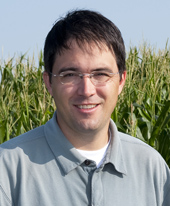