Jackie Norris will speak on women, leadership and service at ISU March 1

AMES, Iowa -- Jackie Norris, senior adviser to the Corporation for National and Community Service (CNCS), will present a lecture at Iowa State University on Monday, March 1. The CNCS works to support the American culture of citizenship, service and responsibility with programs, including Teach for America and AmeriCorps.

Her lecture, "Women, Leadership and Service," will be at 8 p.m. in the Memorial Union Great Hall. The free, public lecture is part of the Women's Leadership Series at Iowa State. 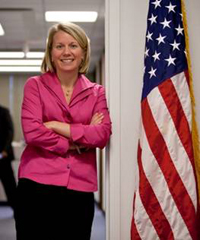 Norris previously served as chief of staff for First Lady Michelle Obama. In Washington, D.C., she also served as scheduler for Vice President Al Gore, director of scheduling and advance for the U.S. Department of Housing and Urban Development Secretary Andrew Cuomo, and on the staff of U.S. Rep. Louise Slaughter (D-NY).

Her Iowa credentials include serving as Barack Obama's senior adviser on the Iowa caucus campaign and state director on the general election. She also was Al Gore's political director for Iowa during the 2000 presidential election.

This lecture is sponsored by the Carrie Chapman Catt Center for Women and Politics, Women's Leadership Consortium and the Committee on Lectures, which is funded by the Government of the Student Body.