AMES, Iowa -- Penn State President Graham Spanier has made it an annual tradition to stay overnight in the residence halls during move-in weekend at the University Park, Pa. campus. He'll share those experiences and what he's learned about today's students in a lecture at his alma mater, Iowa State University, on Tuesday, Feb. 2. Spanier's keynote address will highlight closing ceremonies of ISU's College of Liberal Arts and Sciences 50th anniversary celebration.

Spanier, a nationally recognized higher education leader, received B.S. and M.S. degrees in sociology from Iowa State (along with a doctorate in sociology from Northwestern University). He'll present "What You Can Learn Sleeping in the Residence Halls" at 8 p.m. in the Great Hall/South Ballroom of ISU's Memorial Union. The event is free and open to the public.

"I always enjoy returning to Iowa State, since it brings back so many fond memories," he said. "It is also great to connect with old friends on the faculty and in the community."

"Graham Spanier is an incredibly talented, energetic and compelling person," said Michael Whiteford, dean of the College of Liberal Arts and Sciences. "That he is a university president and an Iowa State sociology graduate makes his return to campus for our college's 50th anniversary all the more meaningful."

President of one of the nation's largest universities

Spanier became the 16th president of Penn State in 1995. He presides over one of the nation's largest and most comprehensive universities with 94,000 students and 44,000 employees on 24 campuses, an annual budget of $4 billion, and a physical plant of 1,700 buildings. He has overseen more than $2.5 billion in philanthropic contributions to Penn State.

Often described as an unconventional university president, Spanier is a magician and has performed with Penn State's Musical Theatre students, the Blue Band, the Glee Club, and the Chamber Orchestra. He occasionally substitutes for the Nittany Lion mascot. He has run with the bulls in Pamplona, has a commercial pilot's license and plays the washboard with the Deacons of Dixieland and other bands. He and his racquetball partner are the 10-time Penn State co-ed intramural racquetball champions. He is the host of "To the Best of My Knowledge," the live, call-in program on public television and radio.

Spanier received the 2009 TIAA-CREF Theodore M. Hesburgh Award for Leadership Excellence. He has chaired the Association of American Universities, the Board of Directors of the National Association of State Universities and Land-Grant Colleges, the Big Ten Conference Council of Presidents/Chancellors, and the NCAA Division I Board of Directors. He led the Kellogg Commission on the Future of State and Land-Grant Universities, was a founding member of the Internet2 board, and served on the Board of Trustees of the National 4-H Council.

Previously chancellor at the University of Nebraska

His prior positions include chancellor of the University of Nebraska-Lincoln, provost and vice president for academic affairs at Oregon State University, and vice provost for undergraduate studies at the State University of New York at Stony Brook. He previously served Penn State from 1973 to 1982 as a member of the faculty and in three administrative positions in the College of Health and Human Development. He holds academic appointments as professor of human development and family studies, sociology, demography, and family and community medicine.

Spanier has authored more than 100 scholarly publications, including 10 books, and was the founding editor of the Journal of Family Issues. A family sociologist, demographer, and marriage and family therapist, he has received Iowa State's Distinguished Achievement Citation and an honorary doctorate from Iowa State for his vision, service and leadership in higher education. 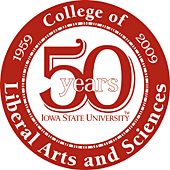 Penn State President Graham Spanier, an Iowa State graduate, will deliver the keynote address in a closing ceremony of the College of Liberal Arts and Sciences 50th anniversary celebration on Tuesday, Feb. 2. Spanier will present "What You Can Learn Sleeping in the Residence Halls," at 8 p.m. in the Great Hall/South Ballroom of ISU's Memorial Union. The event is free and open to the public.

"Graham Spanier is an incredibly talented, energetic and compelling person. That he is a university president and an Iowa State sociology graduate makes his return to campus for our college's 50th anniversary all the more meaningful."