AMES, Iowa - Two researchers from Iowa State University were part of a team that has sequenced the soybean genome.

The two said this sequencing could lead to important improvements to the plant. 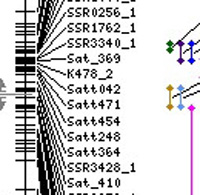 A portion of the soybean sequence

"We now have access to all the hereditary material that controls all the traits in soybean. I think we'll see a lot more directed improvements," said Shoemaker. "Disease resistance would be an important target. We may also see improvements in production stability in an unpredictable climate environment."

The research is featured in the current edition of the journal Nature and was led by the U.S. Department of Energy, USDA and the National Science Foundation. Iowa State and several other universities were involved in the project.

The project was funded by the DOE, USDA, NSF and the United Soybean Board.

Sequencing the genome involves determining the order of all the DNA letters (nucleotides) in the chromosomes of an organism. That amounted to about 1.1 billion letters in the soybean, according to Shoemaker.

The DOE is involved because of the importance of soybeans for biofuels.

"The soybean is the number one oil seed crop in the world," said Shoemaker. "It is a multi-billion dollar industry, not only for the United States, but around the world."

Before the genome sequence can be used for efficient breeding work, researchers must now begin the process of linking portions of the genome to the functions they perform in the plant. Tools to help track down these functions include a Web-based, fully sequenced soybean genome at www.soybase.org, developed by the USDA-ARS team at Iowa State.

"Now it's time to get to work," said Cannon. "Now scientists would like to work to associate those genes with traits. And in the case of the soybean, 40 to 50 thousand genes in the billion nucleotides do the work."

The soybean is in the legume plant family, which includes beans, peas and about 20,000 other species. Soybean is the first legume to be fully sequenced. Researchers hope that it will help speed up the sequencing of other plants in the family.

We now have access to all the hereditary material that controls all the traits in soybean. I think we'll see a lot more directed improvements.

Randy Shoemaker and Steven Cannon were part of a team that sequenced the soybean genome.