AMES, Iowa -- Haight Ashbury meets Mad Max at Disney World. That's one way to describe the Burning Man Festival, a radical and creative community of almost 50,000 that exists for one week every fall in Nevada's Black Rock Desert. Perhaps the most surprising phenomenon at this year's festival (Aug. 30- Sept. 6) will be the 12 Iowa State University design students participating in Burning Man for college credit. Except for the occasional graduate student researcher or class studying the festival from afar, they are the first design students taking a course that requires them to create work for Burning Man since the festival's inception.

The 12 are enrolled in Samantha Krukowski's summer class, "Shifting Sands: Transient Architectures in the Desert." For 20 hours each week since May 17, they've explored the history and meaning of the Burning Man Festival and created artworks that they will transport, install, and remove from the playa (dry lakebed) location. Even before they travel to the temporary town of Black Rock City, their journey has been transformative.

A sense of self-discovery

In the class syllabus, Krukowski, an adjunct assistant professor of architecture, wrote: "Your understanding of the nature of creativity will change ... The way you locate and define who you are will be challenged."

"It sometimes terrifies them, this absolute freedom to create. But I help ground them by asking them to investigate the history and context of their ideas," Krukowski said.

"I want to help the students engage with something, to have access academically to an event and experience they would never normally have," she said. "Proposing and offering this class for credit was radical."

The act of making

"Burning Man is an intensely collaborative experience. Collaboration is at the core of architecture, and some sense of community is always essential to any act of making," she said.

Krukowski assigned an "ice breaker" project the first week of class: Work together to create a sand mandala (a concentric diagram that represents the universe) on the studio floor. It was a way for the students -- who hail from six majors and five nations -- to get to know each other, work collaboratively and experience making dedicated, but transient work. After spending hours painstakingly creating a 6-foot-by-6-foot painting from grains of sand, they ritually erased it.

As the students began their projects, Krukowski instructed them to "work, experiment, make magical things, teach and help each other, bring content to the table and participate in the Festival according to its principles." (See sidebar.)

They've created works of art that span a full range of materials, media, shapes, sizes and concepts -- from the 3-to 12-foot-tall macramé "stalactites" hanging from an abstract steel tree to a collecting kit for gathering and cataloging the ephemera of the festival. 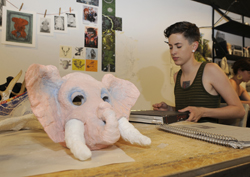 In between are fantastical paper-mâché masks, a "Burning Man Quilt" made by the class and to be completed by festival participants, a "city" of hammocks for desert stargazing, a "foodless restaurant" to foster social interaction, a 10-foot folded-paper pyramid, a 5-foot apple to roll around the playa with smaller apples to gift.

When Etienne Blanc came to Ames from Grenoble, France, he was taken aback by the American tendency to eat fast and on the run. At Burning Man, the integrated studio arts senior will represent his dismay about American meal habits at Burning Man by installing a foodless restaurant, "Une Bouffée D'Air."

"It's not just the French, but the whole world thinks of meals as sacred -- to be valued," Blanc said. "Meals are deeply embedded in the way of life. Meals are for social interaction, sharing, talking." 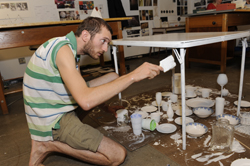 Blanc created an installation of nine sets of tables, each with two chairs, place settings and objects ranging from books to coins to menus. All are painted white to "make it more pure, abstracted: a still life of empty settings." He expects festival participants to treat the artwork as an empty canvas and is interested in seeing how they interact with it and with each other socially.

Blanc, who described the studio as "very demanding," said Krukowski "really helps us by asking the good questions."

"I really learned being independent and choosing a project by myself that I like and feel fits me," he said.

Megen O'Toole, a fifth-year architecture student from Johnston, has learned to "break out ... to go against everything and just make for the sake of making what I was interested in." Her project (the kit for collecting ephemera) has evolved from producing an object to processing an experience.

Admitting she was "really stuck and had no idea what she wanted to make," O'Toole first focused on doors, doorknobs and concepts of privacy and transparency then pondered ideas of voids and leftovers. Those preoccupations morphed into the idea of creating a collecting kit, defining what to collect, how to collect (how do you make a mark of a hug or a foot massage that's gifted, so you can bring it home with you?) and how to organize and categorize the collection.

"They keep telling us that it's going to change us when we get out there. I have no conception of what that might do to me or how I might react," O'Toole said. "I think this collection will be a tangible way of reflecting on the entire experience.

Radical inclusion-Anyone may be a part of the festival.
Gifting-Unconditional gift giving.
Decommodification-No commercial sponsorships, transactions or advertising.
Radical self-reliance-Discover, exercise and rely on own inner resources.
Radical self-expression-Gifts of the individual are unique.
Communal effort-Value creative cooperation and collaboration in social networks, public spaces, works of art and communication.
Civic responsibility-Organize safe, lawful public events.
Leaving no trace-Respect environment; leave no physical trace of activity.
Participation-Transformative change occurs only through deeply personal participation.
Immediacy-Immediate experience is the most important touchstone of value in our culture. 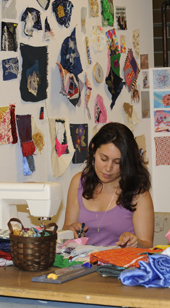 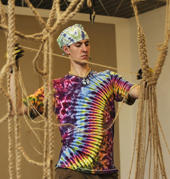 Students in the studio

"I want to help the students engage with something, to have access academically to an event and experience they would never normally have."