AMES, Iowa -- Samantha Edwards has finalized her platform and composed her competitive speech. Although nervous, she's excited about sharing her message at the Ms. Wheelchair America 2011 competition. Edwards will be one of 28 contestants who vie for the national title, Aug. 9-15 in Grand Rapids, Mich.

The Ms. Wheelchair America competition is for women who happen to be wheelchair users. It's is not a beauty pageant, however. The panel of judges selects the most accomplished and articulate spokeswoman based on advocacy, achievement, communication and presentation.

Edwards is more than qualified. The Iowa State University junior from Marshalltown was born with cerebral palsy and received her first wheelchair when she was four. She majors in journalism and mass communication, and is president of the ISU club Alliance for Disability Awareness. Edwards volunteers at the Red Cross and the public library. And she mentors others with disabilities, "strongly" encouraging them to go to college.

"I just try to get the word out about the importance of being an active citizen," Edwards said.

It's something she's passionate about. And she believes the best way she can do that is by example.

Since being crowned Ms. Wheelchair Iowa in March, Edwards has spoken to several groups around the state about the importance of being active in their communities.

She threw out the first pitch at a Sioux City baseball game ("That was fun!") and appeared at the grand opening of an Americans with Disabilities art exhibit at the Marshalltown Community College. She spoke at a conference in Waterloo and at the local retirement home.

If Edwards wins the national title? She will try to perform the required duties of her yearlong reign while continuing at Iowa State, which she chose because it's "really accessible," has a good journalism program and is close to home.

Win or lose, Edwards says she has learned a lot from her experiences as Ms. Wheelchair Iowa.

"There are definitely people out there who accomplish a lot and improve the lives of people with and without disabilities," she said. "This experience has just reinforced that I can go through life, be a productive citizen and accomplish my goals!" 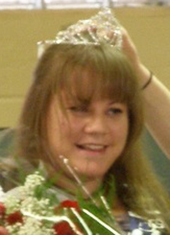 Samantha Edwards, a junior in journalism and mass communication from Marshalltown, is representing Iowa in the Ms. Wheelchair America 2011 competition, Aug. 9-15 in Grand Rapids. Mich.

"I just try to get the word out about the importance of being an active citizen."