AMES, Iowa - Changing climate could affect the diversity of plants and animals, and we can get a glimpse of what this may look like by studying the effects of drought in a relatively pristine ecosystem, according to an Iowa State University researcher.

Diane Debinski has been studying the meadows in the Greater Yellowstone Ecosystem of the Rocky Mountains since 1992. She has found that if the area's climate becomes drier as the earth's temperature climbs, it could lead to a change in the types of plants and animals that live there.

To study the potential effects of climate change, Debinski has been conducting large-scale, long-term, observational studies of the plant and insect communities in 55 montane (mountainous) meadows in the ecosystem. 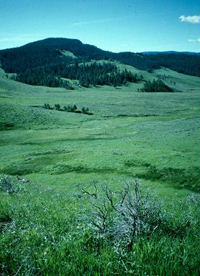 Debinski studied six different types of montane meadows that ranged from dry (xeric) to wet (hydric). These meadows get most of their water from the melting of winter snows. This runoff provides water to the area into July and August.

These meadows get most of their water from the melting of winter snows. This runoff provides water to the area into July and August.

Debinski and her colleagues were able to measure the changes in the plant community from 1997 to 2007, which included an extended drought. Her research was recently published in the journal Ecology.

This may result from the way the plants get water, Debinski said. Shrubs generally have deeper roots and can obtain water from deeper in the soils. Flowering plants generally get water from nearer the surface. These types of changes could have important implications for wildlife in the montane meadows Debinski studied.

"In these meadows, as water became more scarce, that means less moisture for the plants," she said. "The flowering plants don't grow as well and therefore don't provide as much food to the animals. These types of changes in the plants could affect populations of elk, bison, as well as many other smaller animals, including insects."

Since there were fewer flowering plants in the drier years, pollinators such as butterflies were also becoming scarce in several of the plots Debinski and her colleagues studied. Two species of butterflies that live in the wetter meadows actually disappeared from her sampling sites for a year, but were observed again in later years.

Debinski plans to publish the results of her butterfly research soon.

Because there are six types of meadows, from wet to dry, Debinski was also able to examine which meadow type was most vulnerable to change.

The results showed that medium-moisture meadows -- neither wet nor dry -- are in the biggest danger of change.

One aspect of the study that Debinski thinks gives the results even more credibility is the location of the experiment, high in the Rocky Mountains.

"It is important to know what sorts of changes are happening in a place where people don't have much of an impact," she said. "The results of other studies done in other places can blame changes on human impact. Not so much here."

More recently Debinski and her colleagues have added an experimental aspect to the research by using snow removal and warming chambers to assess plant and insect responses in these meadows. The experimental approach will allow them to quantify how specific changes in soil moisture and temperature affect the plants and insects. 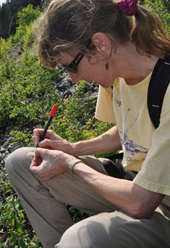 We know that the world changes and ecological communities change over time, but not many people look at the same research sites for a decade or more. I wanted a data set to look at changes in the communities over the long term.