The Iowa State-based team, called "The Chad Larson Experience" for a friend of the team, won the mixed division of the competition by beating a Canadian team by a score of 17-10 in the finals. 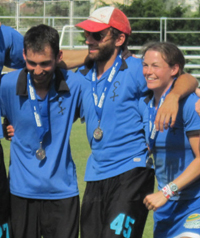 Ultimate is a field game in which teams score by throwing a flying disc to other players to advance down the field and score. It was formerly known as Ultimate Frisbee.

There are four championship divisions: open, women's, mixed and masters.

"It was nice to win after tasting defeat so many times in big games," said Kevin Seiler, team captain.

The team finished 10th in the last world championship tournament in Australia in 2006. They also finished third at the U.S. nationals in 2005 and 2008, and second in the 2009 United States championships last fall to qualify for this year's world tournament.

Thirteen of the 24 athletes on the Iowa-based team are current or former Iowa State students, with the remaining roster spots filled out by players from other college teams.

Players from other teams were recruited for the trip because some original team members couldn't make the trip to Europe as each player had to pay his or her own way.

The trip worked out well for two team members, John and Taiwo Misra, who were married just weeks before the tournament.

"The trip was really a nice springboard for a honeymoon," said John. "It was a great excuse to be in Europe and we were able to travel to London and Rome after we won the tournament."

Taiwo Misra makes a diving grab for a score in an early round match against a team from the United Kingdom.

Forty teams from around the world took part in the championships.

While it is estimated that more 12,000 students around the country take part in Ultimate on the college club level, Seiler realizes that he competes in a sport that hasn't caught on completely in the mainstream of America yet.

"We're big in a sports community that nobody cares about," joked Seiler.

A mostly Iowa State University team won the World Ultimate Club Championships for the sport of Ultimate in Prague, Czech Republic.
The team is called "The Chad Larson Experience" for a friend of the team, and beat a Canadian team in the finals, 17-10.

We're big in a sports community that nobody cares about.