AMES, Iowa - William Lohry took a seat before a projector-camera combination and offered his best smile.

And there, on a nearby computer monitor, was a perfect, but colorless, 3-D image of every line, contour and movement on the face of the senior chemical engineering major from Sioux City. It was like a moving mask, digitally and exactly executed.

Song Zhang, an Iowa State University assistant professor of mechanical engineering, remembers the reaction when he first showed his imaging technology to a scientific conference in 2004: "They were shocked by this technology."

Back then, Zhang was a doctoral student at New York's Stony Brook University working to develop high-resolution, real-time, precise, 3-D images of lung and chest movement. The idea was to develop a new kind of imaging technology to diagnose health problems.

But attendees at the conference were more interested in using the technology to scan faces. It could, for example, be used in face recognition and security applications. And now, with the spread of 3-D movies and television, Zhang is regularly hearing from Hollywood, video game producers and even rock stars.

One of the latest calls came from megaband U2. The band was looking for some imagery to show on the video screens during its performance of "Even Better than the Real Thing" at this month's Glastonbury Festival in England. Band representatives contacted Zhang and he sent along footage of his technology in action. U2, however, has had to cancel its festival appearance because of a back injury to singer Bono.

But Zhang isn't too disappointed. He thinks the band will eventually use his footage. Besides, a stylized version of his technology is already featured in a music video by the band Radiohead.

As for Hollywood and the video game industry, Zhang says he has some work to do before he can help. The current technology requires a lot of data and memory. It's too much to be practical for the entertainment industries right now, but Zhang and his research group are working to develop tools that don't require as much data.

Zhang's technology depends on some simple hardware: one camera, one projector and one personal computer. The projector sends coded patterns over a subject such as Lohry's smiling face. The camera, positioned at a different angle than the projector, records the resulting images. The key to producing real-time, high-resolution, 3-D images is the software developed by Zhang.

"There are many technologies that come together to make this possible," said Zhang.

Zhang and the Iowa State University Research Foundation, Inc. have filed patents for the 3-D technology.

Zhang's work is currently supported by university startup funds and a $360,000 U.S. Department of Justice grant through the Midwest Forensics Resource Center at the U.S. Department of Energy's Ames Laboratory. He's also collaborating with other researchers to develop new applications for the technology.

One project, for example, involves imaging a beating heart at 1,000 frames per second. Another project is developing a vision system for a robot. The graduate and undergraduate students working in Zhang's 3-D Machine Vision Laboratory are working on several other projects: Nik Karpinsky, a master's student from Schofield, Wis., who's studying human computer interaction, is working to develop 3-D video conferencing technology. Yuanzheng Gong, a doctoral student from China studying mechanical engineering, and Victor Villagomez, a senior from Mexico City studying computer engineering, are working on 3-D image analysis.

Zhang said there are many more possibilities for this technology.

"Hopefully," he said, "it will be used in many fields." 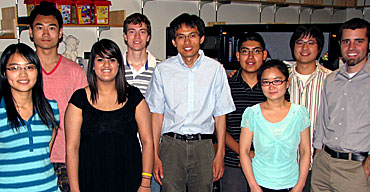 Iowa State's Song Zhang regularly hears from Hollywood, video game and music video producers. They're all interested in his unique 3-D imaging technology. With the help of some simple hardware and some powerful software, Zhang can make real-time, high-resolution, 3-D images.

"There are many technologies that come together to make this possible."