The 12,575-ton, 534-foot USNS Howard O. Lorenzen will be home to a crew of 88 and will host embarked military and civilian technicians and mariners from other U.S. government agencies. Computer-aided image: Naval Sea Systems Command

WASHINGTON - Iowa State University alumnus Howard Otto Lorenzen, known as the "Father of Electronic Warfare" for his breakthrough work at the Naval Research Laboratory, has been memorialized with the launch of a new U.S. Navy ship.

Christened June 26 in Pascagoula, Miss., the USNS Howard O. Lorenzen is the second ship in U.S. Navy history to honor a Naval Research Laboratory scientist for contributions made to naval and civilian research. Operated by the Military Sealift Command, the missile range instrumentation ship will replace the USNS Observation Island launched in 1953.

The 12,575-ton, 534-foot USNS Howard O. Lorenzen will be home to a crew of 88, and will host embarked military and civilian technicians and mariners from other U.S. government agencies. Missile range instrumentation ships provide a platform for monitoring missile launches and collecting data that can be used to improve missile efficiency and accuracy.

Lorenzen, a 1935 Iowa State electrical engineering graduate, had a 33-year career at the Washington, D.C.-based Naval Research Laboratory. He developed radio countermeasures that could exploit detected or interrupted electromagnetic transmissions for military purposes, intelligence gathering and electronic countermeasures - a pioneering concept that was the genesis of modern-day electronic warfare.

Lorenzen died in 2000. His daughter, Susan Lorenzen Black, was on hand for the ship's christening.

"Lorenzen understood and the Navy realized the value and relevance of not only detecting enemy radio and electronic transmissions, but that recording, analyzing and deciphering these transmissions and developing intuitive countermeasures would prove to be an integral and vital function to the future of national security," said Pete Wilhelm, director of the NRL's Center for Space Technology.

Beginning his NRL career in 1940 as a radio engineer, Lorenzen got his first taste of electronic countermeasures when he unintentionally jammed the signal of radar being tested at the lab's radar division. As the U.S. entered World War II with the attack on Pearl Harbor, Lorenzen's research focused on developing electronic means to detect, locate, jam and otherwise deceive enemy radar and other electronic locating equipment, ushering in a new era of warfare to benefit U.S. military countermeasures.

According to the Navy, Lorenzen's most notable achievement came after a U.S. U-2 spy aircraft was shot down over the Soviet Union in June 1960. Lorenzen led the Galactic Radiation and Background payload, or GRAB. GRAB was the earliest space-based reconnaissance satellite and the first U.S. Navy electronic intelligence satellite used to obtain information on Soviet air defense radars that otherwise could not be observed from U.S. military aircraft.

Lorenzen became the NRL's first superintendent of electronic warfare in 1966. During that time, he led the development of defense equipment for naval aircraft to guard against guided missiles. He also helped develop the nation's first portable radar equipment.

Lorenzen was appointed superintendent of NRL Space Systems in 1971 and served in that role until his retirement in 1973. 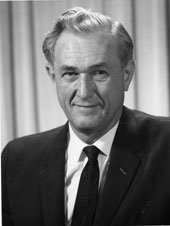