AMES, Iowa -- Frank Meeink will discuss his descent into America's Nazi underground and his ultimate triumph over hatred and addiction during his talk at Iowa State University on Tuesday, March 30. The author of "Autobiography of a Recovering Skinhead" will speak at 8 p.m. in the Memorial Union Sun Room. The lecture is free and open to the public.

By age 16, Meeink was a notorious East Coast skinhead gang leader. By 18, he was in prison in Illinois. While there, he began to question his hatred, largely because of his African-American teammates on a prison football league. Meeink left the white supremacy movement after being paroled. And following the Oklahoma City bombing, he was inspired to speak on behalf of the Anti-Defamation League.

Meeink is the founder of the Hockey for Harmony Foundation, which encourages youth of all races to play hockey.

Meeink's lecture is cosponsored by ISU's Center for the Study of Violence, Margaret Sloss Women's Center, the Multicultural Student Programming Advisory Committee, the Department of Sociology, Students of Sociology and the Committee on Lectures, which is funded by the Government of the Student Body. 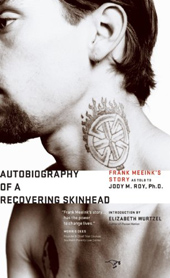