Romney's presentation will be at 7 p.m. in the Memorial Union Great Hall. It is free and open to the public.

In his book, Romney stresses that having a strong America is vital, not only to this country, but to the world. Looking at the lessons of history, he discusses why nations decline, and identifies how America's strength has weakened. Romney's book offers ideas for pathways to American power, solutions for healing healthcare and details on how to develop a free and productive economy.

Romney was CEO of Bain & Co., a management consulting firm, and cofounder of Bain Capital, a private equity investment firm. In 2002, he left the private sector to organize the 2002 Winter Olympics, serving as president and CEO of the Salt Lake Organizing Committee. He was governor of Massachusetts from 2003-07, presiding over a reversal of the state's economy, enacting education reform, and proposing and signing into law private, market-based healthcare reform. In 2008, he ran for the Republican nomination for president.

Romney's lecture is cosponsored by the College Republicans and the Committee on Lectures, which is funded by the Government of the Student Body. 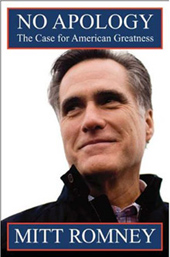 "No Apology: The Case for American Greatness"
Mitt Romney