According to Matt DeLisi, an associate professor of sociology and director of the criminal justice program at Iowa State University, it's a sequence of events and layering of risk factors over a lifetime -- from their prenatal conception and early childhood to their late adulthood -- that mold someone into a lifelong repeat offender. He helps detail the path to becoming a career criminal as author and editor of a new book, "Criminological Theory: A Life-Course Approach" (Jones and Bartlett Publishers), co-edited by Kevin M. Beaver of Florida State University.

"We were able to contact experts from all over the country to contribute to a theory book that talks about crime the way it is now," DeLisi said. "And what I mean by that is for a century, juvenile delinquency or crime focused on adolescence and problem behaviors occurring then. Over the decades, you had people who studied infancy, toddlerhood, childhood, and even all the range of adulthood related to these criminal behaviors. But they were always disjointed fields. We've brought that research together in this book."

Update of "Deliquency in Society" also out

DeLisi published his book at the same time that an update of a textbook he co-authors was published. "Delinquency in Society" (Jones and Bartlett Publishers) creates even a further understanding of the "criminal mind."

"The first part focuses on elements of crime occurring in the first decade of life," DeLisi said. "And then part two on delinquency focuses on what traditionally criminology had focused on, which is adolescence and early adulthood -- the 14-24 age range. The last part deals with adulthood.

"And so with aggression, delinquency and crime, you get this understanding, we hope, that if you have someone who's very anti-social at 70 years old, and you trace that person's life back to childhood, you would likely find common threads in behaviors that unfold to tell a story," he said.

DeLisi reports that people don't radically change over the course of their lives, so the life-course is also apparent in successful individuals. He says achievers and respected leaders generally exhibit positive, prosocial behaviors much of their lives.

And the converse is true for serious criminal offenders.

"There are a lot of problem behaviors in school and in relationships; lots of drug activity and drinking; and often times, lots of psychiatric problems too," DeLisi said. "And there are often lots of traits that were there very early that -- in and of themselves -- weren't bad, but when they come together with other traits, can be bad."

Editor authors a chapter in the new book

He was lead author on a chapter in the book titled "Never-Desisters: A Descriptive Study of the Life-Course-Persistent Offender." In it, the seven authors use data taken from bond interviews with jailed criminal defendants processed at a large urban jail in the western United States between 1995 and 2000 to provide a statistical comparison of life-course persistent (LCP) offenders with "normal" offenders. The LCP sample averaged nearly 60 career arrests -- with more than half having more than 50 career arrests -- while the random "normal" sample averaged six arrests. The authors also compare the two groups on length of prison sentence and the number arrests for violent crimes.

DeLisi has published nine books on delinquency and criminals. Because the books provide insight on the development of chronic offenders, he says he has heard from homicide detectives and other criminology professionals who have both read and endorsed the findings in his books. 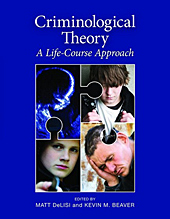 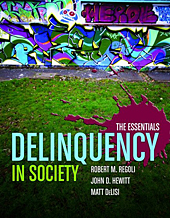 Matt DeLisi, an associate professor of sociology and director of the criminal justice program at Iowa State, has co-edited and authored a new book on the risk factors that influence creation of lifelong repeat offenders -- one of two books he's just published on deliquency.

"And so with aggression, delinquency and crime, you get this understanding, we hope, that if you have someone who's very anti-social at 70 years old, and you trace that person's life back to childhood, you would likely find common threads in behaviors that unfold to tell a story."