AMES, Iowa -- With the final debate now complete and a little over two weeks until the Iowa Republican gubernatorial primary, a pair of Iowa State University political experts have joined the growing chorus of political pundits saying it's former Iowa Governor Terry Branstad's race to lose.

Branstad, a four-term governor who's seeking a fifth term this November, has been consistently polling well ahead of both of his opponents, Bob Vander Plaats and Rod Roberts. And with the vote drawing near, the ISU experts say both time and money aren't on the side of the challengers.

"I don't think Vander Plaats has the money to basically educate or inform Iowa voters who are going to the primary that Branstad had a lot of rough spots [as governor]," said Steffen Schmidt, a University Professor of political science. "There has been some mention [of Branstad's record], but he [Vander Plaats] would have to run a consistent major market ad campaign in Central Iowa, Cedar Rapids/Iowa City, the Quad Cities, Sioux City and then Council Bluffs. And he would have to buy television ads and drill that message home about Branstad's record -- that he raised taxes, etc. -- but that hasn't happened yet."

"Obviously, anything can happen between now and election day," said Dianne Bystrom, director of the Carrie Chapman Catt Center for Women and Politics. "Vander Plaats does appeal to a certain constituency in the state as the social conservative, but he hasn't been able to take his message to have broader appeal. He has a niche, but not a statewide niche. Roberts is trying to position himself between Branstad and Vander Plaats. But most of the polls are indicating that Branstad is the front-runner and it's really his to lose."

A bit too late to go negative?

The Republican race has been, for the most part, amicable. Bystrom suspects that may change over the final two weeks. But it may simply be too little, too late.

"It really hasn't gotten very nasty and it's unknown whether the candidates would be willing to get really negative right before the primary," she said. "I suspect one or two may do that, but I don't think enough to derail Branstad."

And the reason they can't derail Branstad, according to Schmidt, is that they can't do enough to damage his name recognition.

"The problem is that Vander Plaats has the misfortune of running against the biggest name recognition candidate running in any race [in Iowa] this year -- with the exception of maybe Senator Grassley," Schmidt said. "Gov. Branstad has not just one, but two generations of people who recognize his name. And the other thing is that some people have forgotten some of the rough spots during his administrations and have chosen to remember the good spots. That's what you do when times are really bad out there, such as they are right now with jobs and so on."

If Branstad is successful in recapturing the GOP nomination, it will set up a general election with incumbent Gov. Chet Culver that will have no name recognition problem -- either in Iowa, or across the nation. The ISU experts say it may become a real bellwether race by November.

"It becomes huge because Iowa is one of the states that's considered to be incumbent vulnerable," Schmidt said. "Iowa is striped -- not red and not blue on the national maps -- although right now it would be blue because it's got a Democratic governor. It [the governor's race] is considered to be able to go either way, and actually, Culver is considered to be on the endangered list."

"It's a race that political prognosticators from both sides are looking at as a possible pick-up for Republicans and loss for Democrats. And certainly, Governor Culver is in a vulnerable position," Bystrom said. "But in politics, you take it one day at a time and he has time to pull himself up in the polls.

"I think it will be a close race and could go either way," she continued. "Just because Culver's down now doesn't mean he's out." 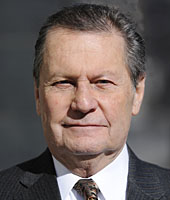 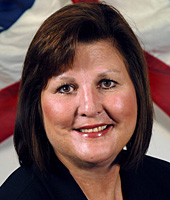 "Obviously, anything can happen between now and election day. Vander Plaats does appeal to a certain constituency in the state as the social conservative, but he hasn't been able to take his message to have broader appeal. He has a niche, but not a statewide niche. Roberts is trying to position himself between Branstad and Vander Plaats. But most of the polls are indicating that Branstad is the front-runner and it's really his to lose."