Iowa State's Mini Baja Team was ninth heading into the last - and biggest - event of the SAE Baja 2010 competition in Bellingham, Wash., sponsored by the Society of Automotive Engineers. And the off-road racer the students had designed and built was running like they thought it would. But there were some problems during the four-hour race worth 40 percent of the team's score, said team member Scott Brehm, a sophomore from Rickardsville who's studying mechanical engineering. The rear shocks blew out early in the race. Then the car was hit in the rear by another car. And the electronics system controlling power to the rear wheels came loose and caused some blown fuses. The result: 23 laps completed (the top three teams completed 47) and a 46th place finish in the race. That dropped the team to 28th overall among 85 scored cars. Even so, "We like this car," said Shane Pearson, a May mechanical engineering graduate from Spencer who has a new job designing suspensions for Polaris Industries Inc. "It performed as we expected and we've finally found a design we can work with." And so Pearson said the team is expecting some better racing next year.

AMES, Iowa - A few members of Iowa State's Mini Baja Team were hunched over a workbench on a recent afternoon, piecing together a device to test their car's drivetrain for torque and horsepower.

It was just one of many garage tasks the team's 12 engineering students had to get done before they could pack up the $8,000 off-road racer they designed and built. Their destination is the May 19-22 SAE Baja 2010 competition in Bellingham, Wash. They're hoping for another good showing in the annual student competition sponsored by SAE, the Society of Automotive Engineers.

Last year's team finished 18th out of 120 competitors in Burlington, Wis. The students had hoped to break into the top 10 overall, but their car was hit and flipped by another car during the competition's most important event, a four-hour endurance race.

"If everything works as we expect it to, we have high potential for better performance," said Chase Schuette, a senior from Owatonna, Minn., who's majoring in mechanical engineering and is the team's fabrication director and assistant project director.

Schuette, Waylon Walker, a junior from Morning Sun who's the team project director, and Scott Brehm, a freshman team member from Rickardsville, pointed to several improvements to the car that could make for a better competition this year.

First, they said the team has developed an electronic clutch that with the push of a switch can send power to just the left wheel, just the right wheel or to both. Second, the team has taken Volkswagen shocks and rebuilt them into custom components for the car. Third, this year's car is lighter than the team's previous entries. And fourth, they like the team's new two-speed gearbox and reconfigured rear suspension.

Will all that translate into a better showing in the competition's acceleration, traction, maneuverability and rock crawl events? What about the scored reports on design, cost and production? And how will the developments affect the big endurance race, worth 40 percent of the team's total score?

The team - backed by sponsors that include Iowa Laser Technology Inc. of Cedar Falls, Dassault Systèmes SolidWorks Corp. of Concord, Mass., Compressor Controls Corp. of Des Moines and 3M of St. Paul, Minn. - is just a few days from putting its ideas on four wheels and finding out. 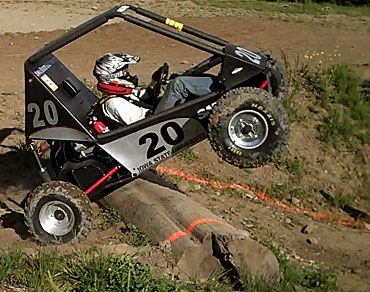 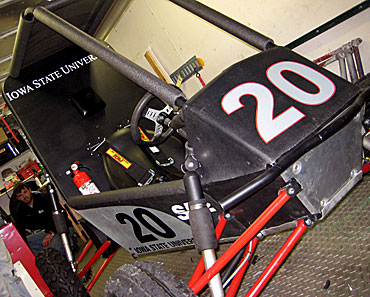 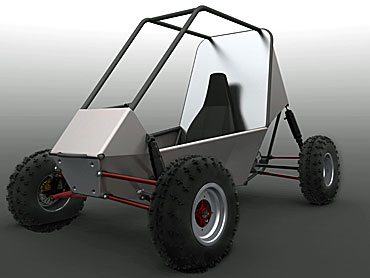 The student engineers of Iowa State's Mini Baja Team will test the off-road racer they designed and built during a May 19-22 competition in Bellingham, Wash. The students are hoping a lighter car featuring an electronic clutch, custom shocks, a two-speed gearbox and a reconfigured rear suspension can move them up the leaderboard.

"If everything works as we expect it to, we have high potential for better performance."

Chase Schuette, a senior from Owatonna, Minn., who's majoring in mechanical engineering and is the team's fabrication director and assistant project director