AMES, Iowa - The metal poles that carry power lines across the country are built to take whatever blows at them. So they're big and round and sturdy - as much as 12 feet in diameter and 100 feet high.

But transmission poles can still fail under the stress of extreme ice and wind. They could also be vulnerable to an infrastructure attack. And when one of them falls, others are pulled down until heavy dead-end structures stop the cascading collapse.

"There are long stretches of these transmission lines across the countryside," said Jon "Matt" Rouse, an Iowa State University assistant professor of civil, construction and environmental engineering. "If you take down one of the poles, you take 10 miles of poles out with it. It's very important to protect these structures."

Rouse has worked with Casey Faber, a graduate student in civil engineering, to design a new kind of pole that not only resists cascading failures, but is cheaper and easier to use.

Rouse and Faber have designed hinged poles that don't need a crane for installation, so they'd be easier to raise. If they're exposed to an extreme load, they could be repaired rather than replaced. They would resist cascading failures so utilities could do away with the expensive dead-end structures. And, they would allow power companies to provide better and more reliable service.

Rouse and Faber said the key was to take a new approach to structural design.

"We're designing a structure based primarily on its deformation ability rather than its strength," Rouse said.

The result is a nominally rectangular pole with a built-in hinge near the base. There are metal plates on either side of the hinge that act as replaceable structural fuses - they stretch and buckle when the pole sustains an extreme load, allowing it to deflect while shielding the rest of the pole from damage. There are also tendon cables running up and down the inside of the pole that resist stretching and work to keep the pole upright. And so when there's a failure, the fuses bend, the hinge pivots, the interior cables tighten and nearby poles are allowed to pick up some of the load.

"If a structure can deform sufficiently, it can allow the rest of the system to use reserve strength from other structures," Rouse said. "It allows the next pole down the line to share the load of ice, wind, a broken line or an attack, rather than forcing one pole to withstand the load on its own."

Rouse and Faber have used support from Iowa State's Electric Power Research Center to successfully test a prototype pole and are working to secure a patent. They also say the utility and power structure industries have expressed interest in their technology.

The time is right for better power structures, Rouse said.

"The country is in the midst of a major shift toward wind power," he said. "We'll be building a lot of transmission lines over the next 20 years. We really need to address these reliability and security issues." 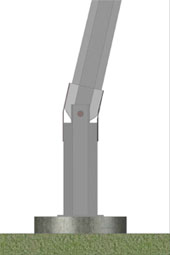 "The country is in the midst of a major shift toward wind power. We'll be building a lot of transmission lines over the next 20 years. We really need to address these reliability and security issues."