AMES, Iowa -- President Obama has called community colleges "one of America's underappreciated assets," and this week's White House Summit on Community Colleges brought together leaders to discuss the most pressing issues facing community colleges in an effort to strengthen their job-training role and bolster the nation's slumping economy.

"Community colleges have a more complicated and arguably more difficult retention pathway because they are likely to attract students who are less-college ready than those who attend the four-year sector," wrote Hagedorn, who is also the president-elect of the Association for the Study of Higher Education.

Because community college students often have competing interests for their time and attention, Hagedorn says they may be less engaged with their studies and have little time to socially integrate in their campuses -- further complicating retention.

She wrote that financial aid is one way to help community college students relieve the pressures that pull them away from their academic pursuits, but it's not always being fully utilized.

"Many community college students who are eligible either do not understand the system, or do not comprehend eligibility," Hagedorn wrote.

She reports that the Advisory Committee on Student Financial Assistance found in 2008 that "millions of community college students who appear to be eligible for need-based financial aid are not applying." And the importance of encouraging community college students to apply for aid was emphasized by a 2009 policy brief released by the American Association of Community Colleges.

Hagedorn also calls transfer from the two to the four-year sector as "an act of system retention."

"Indeed, for most baccalaureate-focused community college students, the path to the degree rests on being able to bridge the chasm between institutional types," she wrote.

For that reason, Hagedorn also was lead author of an article identifying a new downloadable software application she helped create, The Community College Transfer Calculator®. The calculator identifies the course-taking patterns that predict transfer for students. It predicts the impact of key variables on transfer, including ethnicity, age, average credits per semester, course completion rate, highest level of math attained, number of science courses taken, community college GPA, and level of English upon entering community college.

Hagedorn points out that the calculator can be used in both individual and group settings -- such as in private advising sessions, orientation sessions -- or as part of a college success course. And because it uses the types of data that all community colleges collect and store, she also wrote that it can be easily adapted to all institutions.

"The calculator can be modified to use specific variables shown to be of importance to a specific campus, or district," she wrote. "Due to its simplicity of display, the calculator provides important information to faculty, academic advisors, and others in a way that is easily understood."

That makes it a handy tool in the two to four-year transfer process. And Hagedorn says that process will become more frequent as community colleges play a larger role in the postsecondary sector -- particularly amid the current economy.

Iowa State is a research partner with the Academy for Educational Development and the Education Commission of the States on a national Community College Policy Center. 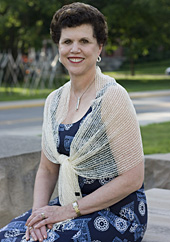 Linda Serra Hagedorn, a professor and interim chair of ISU's educational leadership and policy studies department, was guest editor of a special issue of the Journal of College Student Retention Research, Theory and Practice, on community college retention. In it, she introduced a new downloadable software application she helped create, The Community College Transfer Calculator®, which identifies the course-taking patterns that predict transfer for students.

"Indeed, for most baccalaureate-focused community college students, the path to the degree rests on being able to bridge the chasm between institutional types."