"It's really amazing," said Kawaler, an Iowa State professor of physics and astronomy. "It's as amazing as I feared. I didn't appreciate how hard it is to digest all the information efficiently."

The Kepler spacecraft, he said, "is a discovery machine."

Kepler launched March 6, 2009, from Florida's Cape Canaveral Air Force Station. The spacecraft is orbiting the sun carrying a photometer, or light meter, to measure changes in star brightness. The photometer includes a telescope 37 inches in diameter connected to a 95 megapixel CCD camera. That instrument is continually pointed at the Cygnus-Lyra region of the Milky Way galaxy. Its primary job is to use tiny variations in the brightness of the stars within its view to find earth-like planets that might be able to support life.

The Kepler Asteroseismic Investigation is also using data from that photometer to study stars. The investigation is led by a four-member steering committee: Kawaler, Chair Ron Gilliland of the Space Telescope Science Institute based in Baltimore, Jorgen Christensen-Dalsgaard and Hans Kjeldsen, both of Aarhus University in Aarhus, Denmark.

And Kepler has already buried the star-studiers in data.

Kawaler has had a hand in turning some of that data into eight scientific papers that have been published or are in the process of being published. At Iowa State, he shares the analysis work with undergraduate Sheldon Kunkel; graduate students Bert Pablo and Riley Smith; visiting scientist Andrzej Baran of Krakow, Poland; and nearly 50 astronomers from around the world who are part of the Working Group on Compact Pulsators.

Some of the data describe a binary star system - two stars held together by their gravity and orbiting a common center of mass. In this case, one star is a white dwarf, a star in the final stages of its life cycle; the other is a subdwarf B star, a star in an intermediate stage of development. Kepler not only returned information about the star system's velocity and mass, but also data providing a new demonstration of Einstein's Theory of Relativity.

Kawaler said when the subdwarf's orbit sends it toward Earth, Kepler detects 0.2 percent more light than when it moves away from Earth. This very slight difference is one effect of Einstein's Special Theory of Relativity: the theory predicts a very small increase in the overall brightness when the star is moving towards us (and a decrease when moving away). This relativistic "beaming" is a very small effect that has been accurately measured for stars for the first time with Kepler.

Kawaler said another Kepler advantage is its ability to collect data on a lot of stars. It is expected to continuously observe about 170,000 stars for at least three and a half years.

That gives researchers a much better idea about the average star, Kawaler said.

In the past, researchers analyzed a few interesting stars at a time. "But here, we're learning more about star fundamentals by studying the average guys. The large number of stars we're getting data from gives us a much more accurate picture of stars."

Kepler, for example, is giving researchers a better picture of red giant stars by more precisely measuring their oscillations or changes in brightness. Studies of those star quakes can answer questions about the interior properties of stars such as their density, temperature and composition. It's similar to how geologists study earthquakes to learn about the Earth's interior.

Our sun will evolve into a red giant in about five billion years. It will exhaust its hydrogen fuel, expand enormously and shine hundreds of times brighter than it does today. After that, it will be similar to the stars that Kawaler's group has been studying.

Thanks to Kepler, "We're understanding these stars better," Kawaler said. "And that's a very exciting thing, because these stars represent the future of our own sun." 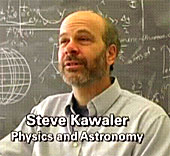 NASA's Kepler Mission is changing how Iowa State University's Steve Kawaler and his fellow astronomers study stars. Kepler, launched in March 2009, is returning data the astronomers say is amazing for its quantity and quality. Kepler, Kawaler said, is "a discovery machine."

"We're understanding these stars better. And that's a very exciting thing, because these stars represent the future of our own sun."

Steve Kawaler, an Iowa State professor of physics and astronomy