The president of Southern Sudan to speak at Iowa State Sunday

AMES, Iowa --The president of the Government of Southern Sudan will speak about the future of Sudan and South Sudan in a lecture Sunday at Iowa State University. General Salva Kiir Mayardit will present "Southern Sudan and the Comprehensive Peace Agreement" at 6:30 p.m. in the Memorial Union Sun Room. His presentation is part of Iowa State's World Affairs Series. It is free and open to the public. 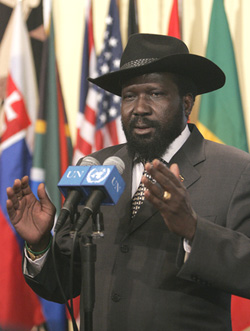 Mayardit, who also is the vice president of Sudan, will talk about the January referendum that will determine whether Sudan will remain united or South Sudan becomes independent.

Mayardit previously served as chief of staff for Sudan People's Liberation Movement. He took over his current position after the death of General John Garang, an Iowa State University alumnus.

The lecture is sponsored by the South Sudanese Student Association, World Affairs Series, and the Committee on Lectures, which is funded by the Government of the Student Body.

Part of the World Affairs Series