Vitzthum has taken about one class each and every semester since. For 40 semesters. Since Miley Cyrus was born. Since Charles and Diana split up. Since Ross Perot pulled out his charts and pointer on TV. Since the World Wide Web was in its infancy (and text only).

Her two kids progressed from tee ball to soccer to band to degrees of their own. Her husband washed more loads of laundry and cooked more evening meals than bargained for. Her friends babysat. Her parents cheered her on.

"I've been doing this so long, I don't think I'll know how not to do it. It almost gives me anxiety to not know what I'm doing this summer," Vitzthum said. "But it's a definite sense of accomplishment."

Vitzthum did not set out in pursuit of a degree. Andrew Burkland, her boss at Electronic Technology Corp. in Huxley, offered to promote Vitzthum if she would take some accounting courses. And the Iowa State engineering graduate wanted her to enroll at his alma mater.

Vitzthum resisted ("I can't do that! My kids are only six and eight years old."). And Burkland countered with an offer to reimburse tuition, help with the application and accompany her to campus to register.

So Vitzthum tackled accounting, often not cracking the books until her family was asleep and "everything was settled down at 9 or 10 or 11 p.m." She plowed through the required courses, from Financial Accounting and Managerial Accounting to Principles of Federal Income Tax and Auditing, with a detour to catch up on math. It took seven years.

The power of a promise

About that time, Vitzthum's father became ill with cancer.

"He said to me, 'You know Kathy, you're this far, why don't you just keep going and get your degree?'" Vitzthum recalled.

She lamented to him that she could be 50 years old when she finishes. Her dad said, "You're going to be 50 anyway, so you might as well keep going."

"I didn't really want to continue. But before he passed away, he made me promise to finish," she said.

That was the turning point. And also where the curio cabinet comes in. 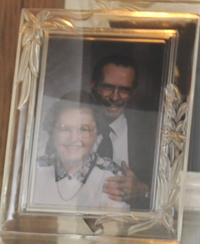 Vitzthum is one of eight siblings in the Doughan family of Algona. Their parents, Dale and Marcie, had a tradition of giving their child a major gift -- something they really wanted -- upon graduation from college. Vitzthum had had her eye on an antique, lighted curio cabinet for some time.

"I thought it was gorgeous. But I knew we couldn't afford it, with little kids and my going to college," she said.

So Vitzthum's parents bought the cabinet. When they presented it, her father said, "I'm not going to be around when you graduate, so I'll give this to you on loan now."

For 11 years, Vitzthum's curio cabinet has loomed large in the living room, a memorial to the promise she made to her father.

"After that, it wasn't an option to quit school," she said. "Every time I looked at the cabinet, I was reminded."

Change is the constant

Eventually, her classes moved from Carver Hall to the new Gerdin Business Building, and more and more were offered online. About 10 years ago, Vitzthum became acutely aware that not only was she older than her classmates, she was older than many of her instructors.

Yet she continued to lug her textbooks along on family vacations. And her husband Keith continued to keep the household running smoothly while advancing his own career (he is the City of Huxley water superintendent). Daughter Kristina, 28, began her freshman year at Iowa State (she graduated in 2005 and works at The Principal Financial Group in Des Moines). Son Kyle, 25, graduates Friday with his nursing degree from Des Moines Area Community College ("We're very proud of both of them.")

Her 74-year-old mother continues to inspire, a mother of eight (all of whom were under the age of 10 when she was 28) who still runs the business she shared with her late husband, now assisted by a Blackberry, Skype and Excel.

"Dad put the spur in me to finish and she kept me going--she's a huge inspiration," Vitzthum said. "She's probably who I get my stamina from -- my stick-to-itiveness."
The family will gather on Friday for a dual celebration: Kyle's commencement from DMACC and Vitzthum's turn as marshal, leading the way for the ISU College of Business ceremony (5 p.m. at Hilton Coliseum).

Persistence does pay off

Even as she credits family, friends, and ISU advisers and instructors for nearly two decades of support, Vitzthum acknowledges she has "a lot of energy somewhere," is too "hyper" to do nothing and is "a freak about time management."Yes, she got the promotion. Vitzthum is senior accountant for Micrel Incorporated, the new name of the company she's been with since 1988.

And her other prize? She will own the curio cabinet that's been on loan, well, since gas was $1.46 per gallon and George W. Bush was first elected president.

"I've been doing this so long, I don't think I'll know how not to do it. It almost gives me anxiety to not know what I'm doing this summer."