AMES, Iowa - Like people, plants experience stress. And also, like people, the response to that stress can determine success.

People can exercise, or rest, or talk about the problem.

For plants, ways to deal with stress are internal. And ISU researchers are trying to understand how they do it.

Stephen Howell is a professor of genetics, development and cell biology and former director of the Plant Sciences Institute at ISU. His research is featured in the current issue of the journal Proceedings of the National Academy of Science.

"We've discovered a new arm of the pathway by which plants activate a response to environmental stress," he said.

Adverse environmental conditions, such as drought, flood, heat and other stresses, affect yield more than crop pests and diseases. Finding a way to maintain high yields for plants under stress is a goal of plant breeders and other agriculture stakeholders, said Howell.

"These are environmental stresses that the farmers can't control," Howell said. "They are acts of nature. And now seed companies are interested in trying to equip plants with the ability to tolerate stress."

Plant cells produce proteins and ship them to different parts of the cell. During production and shipment, these proteins move through an area of the cell called the endoplasmic reticulum (ER).

Under normal conditions, these proteins are folded into their normal, healthy three-dimensional structures as they are produced.

When a plant is under stress, its cells produce poorly folded or unfolded proteins. Inside the ER, a built-in, quality-control system senses this and "sets off an alarm in the cell," said Howell.

In response to the alarm, another protein (IRE1) cuts apart an important RNA molecule, but then splices it back together to create a different sequence.

This cut-and-splice event activates a cascade of stress response genes whose products bring about internal defensive measures that help the plant survive.

"As it turns out, responses that are activated under stress conditions actually inhibit the growth of plants," said Howell. "This allows them to conserve their energy to survive the stress conditions."

For plants in the wild, this response is a survival tactic, he said.

In production agriculture crops, however, these responses reduce yields.

"You don't want crop plants to [stop growing]," Howell said. "You want them to continue to grow and produce even though they are under stress."

With the new understanding of this stress response pathway, Howell says, the next step may be to silence the alarm system.

"What may be important is to disable some of these stress responses," said Howell. "That may make the plant be more productive under stress conditions."

Howell is currently on leave from ISU and is director of the Division of Molecular and Cellular Biosciences for the National Science Foundation in Washington, D.C. 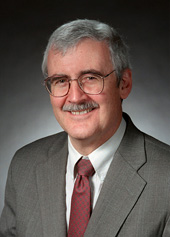