AMES, Iowa -- An Iowa State University student sets off for the wilds of Alaska next week to pan for gold.

For a month, David Hagopian will live and work much like the Alaskan Sourdoughs did more than a hundred years ago. No electronic gadgets. No newfangled tools. No workhorse machines. Just a backpack stuffed with thermal wear. And a camera crew recording his adventure for an upcoming series on the National Geographic Channel.

Hagopian, of West Bloomfield, Mich., and his brother John, a senior at Michigan Technological University, Houghton, were selected for the 13-episode series that begins shooting Aug. 8. And they just learned of their selection 10 days ago.

Hagopian had been wondering what he would do during August. He spent May in Ghana on an agronomy study abroad trip … June in Michigan, mining for a rare mineral with his brother … and July, surveying prairie plants for an ISU research project at the Neal Smith Wildlife Refuge.

"This just topped off my summer," said Hagopian, who majors in environmental science with minors in agronomy and forestry.

"I had applied for a summer internship in Alaska last spring, but didn't get it. Getting to Alaska has been my passion this summer," he said.

The brothers heard about the reality show through a casting call emailed to mining schools in mid-June from the production company Prospector Productions. (Brother John majors in geological engineering at Michigan Tech.) They applied in mid-June.

"It's insane how quickly this has happened," Hagopian said.

For the past week, Hagopian has received communications from Prospector Productions, which is producing the series for National Geographic TV.

So far, all they know is an approximate location for the shoot -- south of the Yukon River and north of Fairbanks on 10,000 acres of private land "with proven gold reserves." In addition to the plane flight, the producers provide basic shelter (no bedding), food, water and "only the tools that the Old Timers used."

"They told us to look up the location and think about what we might need to pack," Hagopian said. "And they said we'll be standing in water for several hours every day. Temperatures could go as low as the teens and snow is not uncommon."

Other details are intentionally vague. The brothers don't know if they'll be living and prospecting together, how many others will be on the show or if someone will be eliminated each week.

And, although they receive no wages, they do get to keep whatever gold they find. With current prices at about $1,600 an ounce, Hagopian could harvest a tidy sum. But he's not counting on finding "any riches."

Even so, the brothers have made a little cash on some amateur mining in Michigan. This summer, they found the rare mineral mohawkite, which early miners discarded in favor of copper.

"It's a geologic phenomenon and worth more than copper today," Hagopian said.

Since childhood the brothers have fancied digging "down and looking at different layers" and hunting for rocks and stones. John wants to work as an engineer for a mining or oil company that locates deposits. David plans a career in soil remediation or environmental consulting.

"Every mining company needs a remediation plan for 'cleaning up the mess' when they're done digging. They deal with heavy metals and have to ensure the soil or materials don't leak or leach into the water system," Hagopian explained. "I'd like to work on making the land safe again. And hopefully travel in the process."

Iowa State junior David Hagopian will spend August panning for gold in Alaska for an upcoming series on the National Geographic Channel. He will live and work much like the Alaskan Sourdoughs did more than a hundred years ago. The environmental science major from Michigan applied for the program in June, and was selected 10 days ago. He leaves Aug. 8 for Alaska. 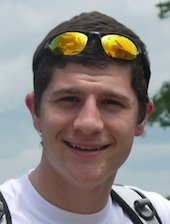 "This just topped off my summer."