AMES, Iowa - When the Skunk River Navy students slogged down river on their annual cleanup patrol this fall, they weren't looking for trash. They were looking for art.

And instead of the typical grim mood brought on by the sheer volume of junk in the Skunk, the Iowa State University students were absolutely buoyant. Because when they looked at the rusted metal, twisted springs, broken bottles and punctured inner tubes, they envisioned funky sculptures, intricate mosaics and graceful jewelry. 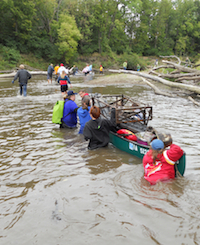 The Skunk River Navy is a service project in ISU's freshman biology learning community. And this semester they added new dimensions to the annual trash patrol: Student artwork and a commissioned sculpture all created from the collected trash.

To make things interesting, freshmen from the College of Design's two learning communities were invited on board to collaborate. They could participate in the trash cleanup, learn about river biology and transform the found objects into art alongside the biology freshmen.

And an anonymous donation floated in, pumping some funding into the project and clearing the way for a commissioned sculpture for the navy's home base in the Department of Ecology, Evolution and Organismal Biology (EEOB). Also, sculptor Michael Stanley, a lecturer in the integrated studio arts program, helped the freshmen navigate the art studio. Jim Colbert, the EEOB associate professor behind the navy, steered them through their river-biology experience in which they collected more than 6,000 pounds of discarded stuff.

The art-meets-science-at-the-river project was the brainchild of Denise Hix, academic adviser and coordinator of the biology learning community of about 150 freshmen. She sees a connection between biology and art, is a "big believer" in being well-rounded, and thought creating art would be a unique way for the students to reflect on their river experience.

"This collaboration with the design college is a way to emphasize that biology students can enhance their study of science with humanities," Hix said. 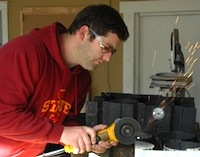 Stanley in his studio. Photo by Alison Weidemann.

Stanley met with the students before the river patrol and during two studio work sessions afterwards. He gave them a presentation about found art, laying out in basic terms ways to make things out of nothing.

"I told them that anything they did will re-purpose the object or keep it around a little longer," Stanley said. "I suggested they look for unique items or multiples, which are easier to make something out of.

"They had a preconceived notion that their artwork had to be beautiful, but I told them to relax and have fun with it. After that, they ran with it. And they did a great job," he said.

J.C. Renteria, a biology and animal ecology major from Lakeside, got involved because he "was missing art a lot in college."

"Art and ecology are my two favorite things. So when I heard about this opportunity, I definitely wanted to be involved," Renteria said. "It's been an amazing experience to make art from things found on the river clean up." 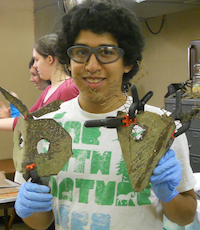 Renteria in the studio.

Renteria used sheet metal and plastic to create three masks -- a deer, an owl and a salamander --each signifying "something we should learn from nature."

Christy Butler, a pre-graphic design major from Nevada, said she had fun "getting messy" and will go on future patrols to clean up the river in her home county. Butler created a bobble head "with exploding ideas," using pop cans, glass, plastic and springs.

"When you look at the river you don't expect to find trash. It was amazing to see all the stuff that was in there," she said.

When biology major Toni Proescholdt, Marshalltown, looked at pieces of trash being pulled from the river, she saw each object in a new light.

"It's interesting to see what it used to be and think what it could be," Proescholdt said. "This opened my eyes to what all I could be doing."

Inspired by discovering different ways to look at each piece of trash, Proescholdt created five works for the exhibition -- jewelry from inflatable rafts and resin, and two playful sculptures from glass, aluminum, plastic, metal and rubber.

"Looking at the finished art, I don't think you can tell which pieces were created by biology students and which by design students," Hix said. "And when we were out doing field identifications, you couldn't tell who was who either.

"Everyone stepped outside their comfort zones, tried something new and learned something in ways they wouldn't have done otherwise," Hix said. 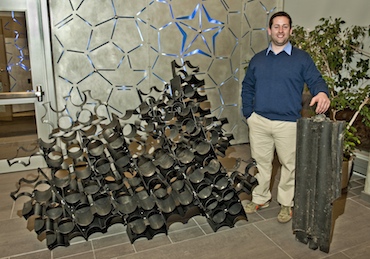 Michael Stanley with his found-object sculpture. Photo by Bob Elbert.

Stanley created the sculpture, "Cellular Debris," to be too big to be stolen, but portable enough that two people could move it to different campus and community locations for display. The sculpture is six-by-five feet and weighs about 80 pounds.

A steadfast proponent of re-purposing found objects as art, "so they're not going to a landfill," Stanley chose to work with an abundance of identical black plastic objects. He knew as soon as he spotted them, they'd be integrated into his commission.

"We found a huge field full of separators that trucks use to keep round pipes square for stacking," he said. "These are perfect for this project because they're manmade, hard plastic and really bad for the environment. Even metal will eventually erode and degrade, but plastic and Styrofoam never will."

Stanley cut the pieces into seven-and-a-half-inch sections and experimented with attaching them, using rivets because adhesive wouldn't stick. Once he started cutting the separators apart, he saw positive and negative shapes that resemble cellular structure in biology, reflecting its semi-permanent home in Bessey Hall. The sculpture is dedicated to the 1,700 volunteers who have served in the Skunk River Navy since 1998.

"Everyone stepped outside their comfort zones, tried something new and learned something in ways they wouldn't have done otherwise." 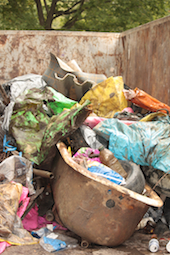 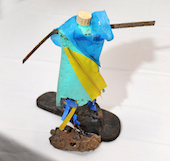 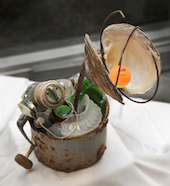 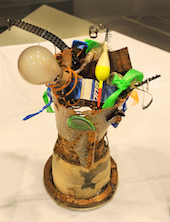 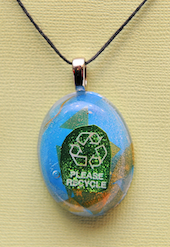 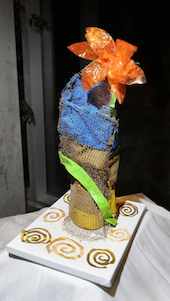