AMES, Iowa -- After working more than 20 years in Louisiana's petrochemical industry, Jerome Ringo turned to a career in conservation and environmental justice, which has included appearing in the Oscar-winning documentary, "An Inconvenient Truth." Ringo will discuss his experiences and the opportunities for citizens and communities to work together during a talk at Iowa State University.

"Diversity in the Environmental Movement: Our Collaborative Opportunities" will be at 8 p.m. Monday, Feb. 21, in the Memorial Union Great Hall. His presentation is free and open to the public. It will kick off the university's Symposium on Sustainability, where Ringo will also present the keynote address.

As Ringo observed the negative impacts of the petrochemical industry's pollution on the primarily poor and minority communities along the Gulf Coast, he became a vocal advocate for clean energy and increased minority participation in the environmental movement. In 1996, Ringo was elected to serve on the National Wildlife Federation board of directors and became chair in 2005, the first African-American to head a major conservation organization. He is senior executive for global strategies for Green Port, a private company that focuses on establishing sustainable ports around the world, and a board member of the environmental organization Apollo Alliance.

The United States' only black delegate at the 1998 Global Warming Treaty negotiations in Kyoto, Japan, Ringo also represented the National Wildlife Federation at the United Nations conference on sustainable development in 1999. He was a keynote speaker at the Montreal Climate Summit in 2006, the United Nations African Climate Conference in Nairobi in 2006, the Kyoto Plus Conference in Berlin in 2007 and the 2008 Democratic National Convention in Denver.

In 2006, Ringo was a McCloskey Fellow and associate research scholar at Yale University. He is a contributor to "Diversity and the Future of the U.S Environmental Movement" and "The Green Festival Reader."

Ringo's talk is presented by the sponsors of Iowa State's Symposium on Sustainability and the Committee on Lectures, which is funded by the GSB. More information on ISU lectures is available at http://www.lectures.iastate.edu, or by calling 515-294-9935. 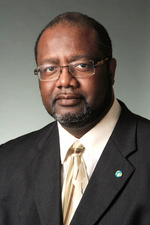 "Diversity in the Environmental Movement: Our Collaborative Opportunities"

8 p.m. Monday, Feb. 21
MU Great Hall
Free and open to the public
Part of the Symposium on Sustainability