AMES, Iowa -- While the contentious political debate rages on in Washington over the implementation of the Patient Protection and Affordable Care Act (PPACA) of 2010 -- nicknamed "Obamacare" by its critics -- it's now law. And in a report published in the new issue of IAbiz magazine, Iowa State University economist David Swenson points out that very large fractions of its provisions have some impact on commerce and Iowa's workers in general, small businesses in particular, and on the state's important and diverse insurance industry.

"Accordingly, the key planning task for business and for workers is to understand how and when the PPACA affects them," wrote Swenson, an associate scientist in economics and staff member in ISU's Regional Economics and Community Analysis Program (RECAP).

Swenson wrote that there's probably not an honest analyst out there who would not have concluded, as Hewitt Associates did in its 2009 report to the Business Roundtable -- an association of chief executive officers of leading U.S. companies -- that the health care "status quo is not sustainable." He points out that in 1990, a shade over one in seven dollars of our consumer spending went to health care and prescription drugs. But by 2009, that ratio approached one in five dollars.

"That study [Hewitt Associates] concluded that our health care market was 'poorly functioning,' and that absent meaningful reforms, our 'status quo' will result in a 166 percent increase in per-employee health care costs over the next decade," he wrote. "If we add to that our collective and looming obligations for Medicare for the elderly -- especially as the Baby Boom generation begins to accelerate their health care demands -- and growing Medicaid entitlements to the poor and the disabled, it is undeniable that both the smooth functioning of businesses and our state and federal governmental systems are at stake if health costs are not contained."

Of the provisions of the PPACA affecting businesses that were implemented immediately, Swenson contends that the most salient involved providing tax credits for small businesses -- those with fewer than 25 employees -- to offset the costs of covering employees. For-profit small firms could receive a 35 percent tax credit to offset insurance costs, and non-profits could receive a 25 percent credit.

Specifically in Iowa, Swenson wrote that the impacts of the PPACA will certainly be felt among the state's insurance carriers that do provide medical and health insurance.

"The very nature of the PPACA involves a widespread expansion in the financing and the consumption of health care with rates and risks determined on a much larger fraction of the state or the national population," Swenson wrote. "For efficient providers, this has the potential of increasing insurance sales. Ultimately, this ought to result in more certainty as to expected returns and act as a stabilizing agent on the insurance market."

The story is decidedly different, according to Swenson, for Iowa's insurance agencies -- large fractions of which are independent, and larger fractions of which are small firms themselves. He sees them being doubly-impacted in that they will have to provide insurance to their workers, and many have counted the writing of medical insurance policies as an important portion of their annual sales.

"The new exchanges are authorized to provide direct sales to consumers, though they do not exclude the use of agents," Swenson wrote. "Iowa's insurance agencies will have to navigate new territory replacing existing sales with future sales, the profitability and desirability of which is thoroughly uncertain."

Swenson sees the PPCA leaving some of us better off and some of us worse off financially. On net, however, he says it is expected to save society money and curb out-of-control health care costs.

"Many small firms and otherwise uninsured workers will see their health insurance costs rise," Swenson wrote. "Public systems are expected to realize savings as the private sector and individuals absorb more health care financing responsibility. Firms may eventually realize greater productivity because of a healthier workforce, and business health care costs might be contained by the law. Universal coverage cannot be obtained without expanding national health care spending, however, and in the short run there will be strong adjustments for all of us to make."

"In the long run, the PPACA should produce a healthier America," he continued. "Whether it will be worth the cost, however, remains to be seen."

His complete article is available online. 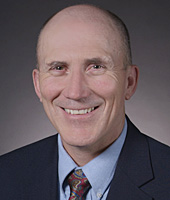 In a report he authored for the new issue of IAbiz magazine, ISU economist David Swenson points out that very large fractions of the Patient Protection and Affordable Care Act (PPACA) of 2010 have some impact on commerce and Iowa's workers in general, small businesses in particular, and on the state's important and diverse insurance industry.

"In the long run, the PPACA should produce a healthier America. Whether it will be worth the cost, however, remains to be seen."