6-13-11 update:
Iowa State University's Baja SAE Team had a great start to its race weekend: 9th in sales presentation and 18th in design presentation. Those are the best results the team has ever earned. But then there were some mechanical problems. A drivetrain shaft broke and a rear suspension piece bent. And suddenly the best the team could manage was 59th overall (out of 97 ranked competitors). "We like this car and we're disappointed we didn't have it more ready for competition," said Chase Schuette, a veteran team member from Owatonna, Minn., who just earned a degree in mechanical engineering and is about to start a job with Caterpillar Inc. "The sad fact is we weren't ready. But we were very close."

And Eric Schluttner huddled over a 10-horsepower, Briggs & Stratton engine, preparing to finish and attach a safety cover for the belt that connects the engine to the transmission.

It was another busy day in the campus garage for the student-engineers of Iowa State University's Baja SAE Team. The team is prepping for design, sales and off-road racing competitions June 8-11 near Peoria, Ill. The annual competition for student-designed and student-built off-road buggies is sponsored by SAE International, formerly known as the Society of Automotive Engineers. There are 115 teams - including teams from Canada, India and Mexico - registered for this year's competition.

The competition's big event is a four-hour endurance race worth 40 percent of the team's total score. Last year's team was in ninth place heading into the long race, but contact with another car, failed rear shocks and blown fuses in the electronics system dropped the team to a 28th-place finish.

The team has a few ideas to move back to the front: using manufactured shocks instead of homemade ones; manual hand clutches instead of electronic, push-button ones; and a much lower gear ratio.

Otherwise, this year's $12,000 car continues with the best ideas from last year's car.

"We liked what we had last year," said Chase Schuette, a veteran team member from Owatonna, Minn., who just earned a degree in mechanical engineering and is about to start a job with Caterpillar Inc. "We've made some changes, but the core design of the car is still there."

One of the car's core features is a clutch on each rear wheel that allows the driver to choose which wheels power the car: the right, the left or both. Schuette said the switch from electronic to manual clutches will give the driver a much better feel for the car's performance.

Upah, a senior from Ames who's studying mechanical engineering, said the car also features a switch from fiberglass to plastic body panels. That won't be a big boost in performance, but it's much easier to manufacture, and that should score points in the design competition.

Schluttner, a senior in mechanical engineering from Oronoco, Minn., also helped move the manufacturing process ahead by building a workbench that can hold, turn and flip the car for easier access to the chassis.

And how will all those improvements translate into points?

"This car should be very competitive," Schuette said. "And now we just have to get it done." 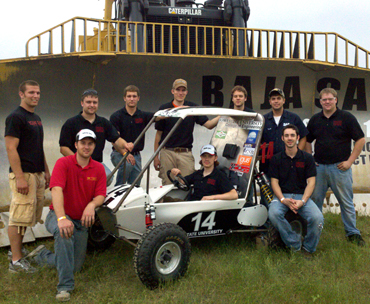 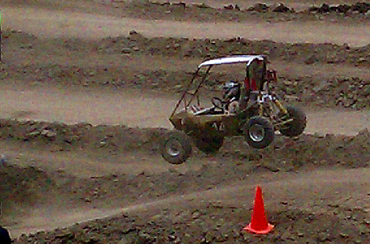 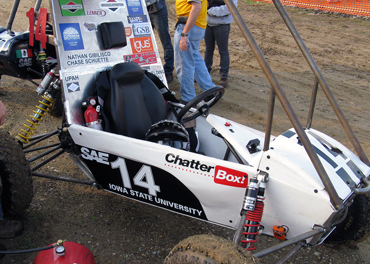 VIDEO: Sit in the driver's seat as Iowa State's Baja SAE Team competes in the four-hour endurance race. And watch the team take on the hill climb (and listen to the team cheer).

The student-engineers of Iowa State's Baja SAE Team will race their off-road buggy June 8-11 near Peoria, Ill. They think they've solved some of the problems that slowed last year's car during a four-hour endurance race. And so they're optimistic they have a competitive car again this year.

"This car should be very competitive. And now we just have to get it done."

Chase Schuette, a veteran team member from Owatonna, Minn., who just earned a degree in mechanical engineering and is about to start a job with Caterpillar Inc.