AMES, Iowa -- Richard Schrock, who won the 2005 Nobel Prize in chemistry, will speak at Iowa State University. "A Lifetime of Chemistry: Reflections of a Nobel Laureate" will be at 8 p.m. Tuesday, March 22, in the Memorial Union Sun Room. His presentation is the 2011 Iowa State Presidential Lectureship in Chemistry, and is free and open to the public.

Schrock received the prize for his work on metathesis, a process now widely used in the development of pharmaceuticals and manufacture of advanced plastic materials. He discovered a metal-compound catalyst that triggers metathesis, a chemical reaction that breaks and reconstructs the bonds between carbon atoms and the clusters the atoms form. As a method that reduces potentially hazardous waste through smarter production, Schrock's work was an important advancement in green chemistry.

Schrock earned a doctoral degree from Harvard University and completed postdoctoral work at Cambridge University in England. In 1975, he joined the faculty of the Massachusetts Institute of Technology where he has held the position of Frederick G. Keyes Professor of Chemistry for 21 years.

Schrock's talk is cosponsored by the Department of Chemistry and the Committee on Lectures, which is funded by the Government of the Student Body. More information on ISU lectures is available at http://www.lectures.iastate.edu, or by calling 515-294-9935. 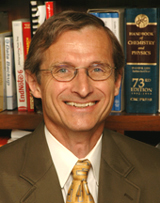 "A Lifetime of Chemistry: Reflections of a Nobel Laureate"