AMES, Iowa - The latest U.S. Labor Department numbers suggest that job prospects continue to improve. The number of workers filing new claims for unemployment benefits fell by 6,000 last week -- the second decline in three weeks -- adding to growing evidence that layoffs are slowing and employers may be stepping up hiring.

The National Association of Colleges and Employers shares that optimism in its Job Outlook 2011 report. The group's September survey of nearly 200 employers nationwide showed that those companies expect to hire 13.5 percent more new college graduates in 2011 than in 2010. That survey also showed that starting salaries are expected to rise 3.5 percent overall from last year.

That's good news for this spring's new college graduates and more experienced job seekers alike -- particularly at a time when job search activity seems to rise with the warming temperatures.

Kathy Wieland (left), director of Iowa State's College of Business Career Services, reports that the number of companies recruiting on campus, the number of available job openings and the number of students landing interviews and jobs all are improving in her college.

"Absolutely," Wieland said. "Our College of Business students are finding plenty of opportunities and certainly a much improved climate from 2008-09."

Time to apply for that "dream job"

Much better job prospects might make it the perfect time to apply for that "dream job," Wieland says. And two Iowa State economics associate professors who have been studying self-confidence say you shouldn't let that little voice inside your head talk you out of applying. 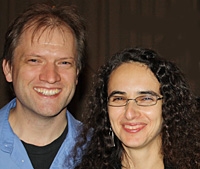 Markus Möbius and Tanya Rosenblat (right) began self-confidence research because of previous literature finding that women tend to enter fewer competitions -- including competing for top corporate management positions -- than men. They theorized that self-confidence -- or a lack thereof -- is a reason.

Their experiment on decision-making by 656 Harvard undergraduate students on an IQ test found that subjects carefully regulate their self-confidence to the potential detriment of subsequent decision-making. They were much better at assessing the performance of others than themselves. And the less confident subjects were more reluctant to ask for extra feedback.

"This study showed why it's important to get all kinds of feedback from others. That's why there are career counselors," said Möbius. "Since people tend to be less accurate in assessing their own skills relative to others, an outside perspective helps -- even if it's not an expert."

Careers professionals certainly can provide expert feedback on what works and doesn't work when applying with potential employers. Steve Kravinsky (left), director of career services for the College of Liberal Arts and Sciences at Iowa State, says a good resumé should:
• Be geared toward a specific industry/area of interest
• Be your advertising/promotional brochure
• Invite the reader with a clear layout
• Be concise (one page, two maximum)
• Have a consistent format throughout
• Start phrases with action verbs
• Use the vocabulary of the industry
• Contain only the most relevant information
• Focus on what you can do for the employer
• Be brief; employers will spend 10-15 seconds to preview
• Quantify when possible -- "supervised staff of five."
• Edit carefully, proofread, spell check and read aloud -- have zero tolerance for errors.

Kravinsky says a resumé should not contain:
• Personal information -- height, weight, health, marital status, etc.
• Salary expectation
• Potentially controversial or negative information, such as religion, age or politics
• Personal pronouns, such as "I"

And job seekers also shouldn't let some negative employment news deter them from applying with a certain company, either.

"I've had some employers tell me, 'You're going to read about layoffs for us in the paper next week, but you should know that doesn't have anything to do with my college recruiting process,'" Wieland said.

"Our College of Business students are finding plenty of opportunities and certainly a much improved climate from 2008-09."