AMES, Iowa - Official poverty numbers for the Des Moines metropolitan area show rates that are much lower than the rest of Iowa and better than nationwide numbers.

When you look beneath the surface, however, Des Moines' numbers can be misleading, according to David Peters, assistant professor of sociology at Iowa State University.

The Des Moines metro has a poverty rate of 8.5 percent. Iowa has a rate of 11.4 percent. Nationwide, poverty sits at 13.5 percent according to 2009 numbers from the U.S. Census Bureau, the most recent figures available.

Official figures breakdown income levels to the county level. Peters broke down the numbers to the block group level which measure incomes in areas about 10 blocks square.

"I wanted to look at urban poverty," said Peters. "Traditionally urban areas have much lower poverty levels than rural areas. I wanted to look at sub-county areas and block group levels of poverty. Some of the wealthiest neighborhoods in the state and some of the poorest neighborhoods the state are in Des Moines. When you lump them all together, they average out, so it gives you a false picture of prosperity."

Peters gives an example of how high-level poverty numbers can be misleading.

Poverty levels have remained steady in the past 30 years in Polk County having risen only 1 percent.

Peters thinks looking at poverty at the sub-county level is valuable. By learning exactly where poverty levels are highest, Peters says, it is easier for cities to target services to these areas.

"If you want figure out where to run bus lines, or where to put social services where they would have the most impact, this research will help cities do that," said Peters.

Peters said he could perform similar studies for other Iowa cities that request them.
One of the surprising findings for Peters were the pockets of poverty he found in the Des Moines-area suburbs.

"There are pockets of poverty in West Des Moines and Clive where there are more than 20 percent of the people living in poverty. That is surprising to me," he said.

Another of Peters' findings showed that in some areas surrounding Polk County, poverty dropped significantly over the past 30 years.

"In Guthrie County, poverty went from 15 to 8 percent since 1979, so that is a pretty big drop," said Peters. "In Madison County, there was 4.7 percent drop in poverty."

Municipalities around Des Moines but not adjacent to it, are sometimes referred to as exurbs by demographers.

Peters believes the drops in exurban poverty, like those in Guthrie and Madison counties, are probably due to prosperous suburban dwellers moving to these areas and replacing farms that were not prosperous or only marginally prosperous.

"The poverty rate has gone down, but there are probably the same amount of poor people in those counties. Wealthy people moving from the city to the suburb or exurb make the percentage go down," he said. 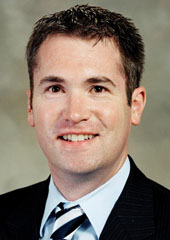 Official poverty numbers for the Des Moines metropolitan area show rates that are much lower than the rest of Iowa and better than nationwide numbers, but an ISU researcher has taken a closer look and he shows the numbers can be misleading.