One was a soldier from Brooklyn, Charles Walter Rhinehart, who died in the Korean War.

Rhinehart was born on July 6, 1928, to Leo and Mabel in Brooklyn, the second of six children. The family farmed, keeping several hogs and about 20 milk cows. Because the children were expected to help with chores after school, Rhinehart didn't participate in school sports and activities.

But one hobby -- flying -- turned into a passion for the Rhineharts. A neighbor who returned from serving as a World War II pilot bought a J-3 Piper Cub and started a training school. Leo Rhinehart and his two brothers became infected with the flying bug, earned their private pilots' licenses and together bought their own Piper Cub.

With the threat of the draft, Barnes enlisted in the Army. For financial reasons, Rhinehart also enlisted, but in the Air Force. He had earned his private pilot's license in September 1950 and wanted to fly. 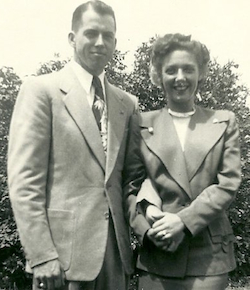 After some training at Randolph Air Force Base, Texas, Rhinehart trained on T-33 and F-80 jets at Williams Air Force Base, Arizona. Next, at George Air Force Base in California, he flew F-86s. And he met his future wife, Beth Demedenko. They married a week before he left for Korea.
Rhinehart achieved the rank of first lieutenant and was assigned to Korea in August 1951. Stationed at Kimpo Air Base across the Hahn River from Seoul, he flew F-80s on close support missions. According to Barnes, who also was in Korea at the time, "the unit moved down to Suwon because they were losing too many planes trying to get over the mountain at the end of the runway while carrying everything but the kitchen sink."

After a time there, Rhinehart was transferred to the F-86s, flying fighter interceptor work over the Yalu River. He was in the 16th Fighter Interceptor Squadron of the 51st Fighter Bomber Group.

"He flew the F-80, bombing, strafing and launching rockets," Barnes said. "He got in about 65 missions in the F-80 then flew some 20 missions in the F-86E Sabrejet, which he liked better. He was in the 4th Fighter Wing. Their mission was intercepting unidentified aircraft."

The North American F-86 Sabre was one of the most successful jet fighters of all time, and was the first swept-wing fighter to fly for America. When it went into service in 1949, it was an immediate success going up against the Russian MiGs. However, the F-86 engines were notorious for oil escaping at high altitudes, where U.S. crews gained a combat advantage.

Rhinehart's last mission was on Jan. 29, 1952, over MiG Alley -- the name U.S. Air Force pilots gave to the northwestern portion of North Korea. The war's rules of engagement restricted the acceptable range for engaging in air combat to this narrow area. As the site of large-scale air battles between U.S. pilots and the Russian pilots known to be flying for North Korea, MiG Alley was considered the birthplace of jet fighter combat.

During Rhinehart's flight over MiG Alley, his engine froze due to a loss of oil pressure. He headed for the west coast of North Korea and ejected over the Yalu Sea. Initially considered to be missing in action, Rhinehart was listed as presumed dead on Feb. 28, 1954.

But in 1993, Rhinehart's name appeared on a list entitled, "the transfer of U.S Korean War POWs to the Soviet Union." It is believed that after he bailed out, North Koreans may have captured him, then turned him over to the Russians for interrogation. It is assumed that captured pilots and crews were sent to Russian gulags where they were worked to death.

His younger sister Marilyn said, "When he was lost, my 11-year-old mind could not understand that he would not be found and come home. Thirty-some years later when I touched his name at the MIA memorial wall at Punchbowl Crater in Honolulu, I tearfully honored his sacrifice. He will always be my hero."

In addition to the memorial in Hawaii, he is remembered on a bronze plaque next to his parents' graves in the Brooklyn Cemetery and on the National Aviation and Space Exploration Wall of Honor Museum at the Smithsonian National Air and Space Museum in Washington, D.C.

"When he was lost, my 11-year-old mind could not understand that he would not be found and come home. Thirty-some years later when I touched his name at the MIA memorial wall at Punchbowl Crater in Honolulu, I tearfully honored his sacrifice. He will always be my hero."