AMES, Iowa -- There's a reason Iowa State University's student union is named the "Memorial" Union. The building was created in 1928 as a memorial to Iowa Staters who died in World War I. Their names are engraved in the walls of the union's Gold Star Hall -- the stained glass and column-adorned spatial expression of the memorial. 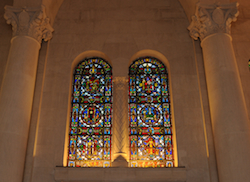 Decades after the building opened, more fallen, former Iowa State students became known. In 1959, the names of World War II casualties were mounted on two bronze doors in the Memorial Union's zodiac foyer. In 1984, the names from World War I, World War II, Korea and Vietnam were engraved into the limestone inside Gold Star Hall. Name additions have also been made in 2003, 2006, 2007, 2008, 2009 and 2010 -- adding overlooked servicemen from World War II, Korea, Vietnam and Somalia, as well as Iraq and Afghanistan.

The memorial tribute for fallen soldiers continues this year. The names of four former Iowa State students who died while on active duty in the U.S. Armed Services are being added to the wall. And their lives will be honored during the annual Gold Star Hall observance. The ceremony will be at 3:15 p.m. Thursday, Nov. 10, in the Memorial Union Great Hall. It is free and open to the public.

One of the honorees died this year in Afghanistan, and the other three were casualties of the conflict in Korea, 60 years ago. (See sidebar.)

During the ceremony, each soldier's life will be remembered through personal stories and photos. These were compiled by Kathy Svec, ceremony coordinator and retired ISU Memorial Union marketing director, who researched each person through local newspapers, genealogical and historical societies, yearbooks, phone directories and online resources to track down family members and piece together each soldier's life story.

In addition to the soldiers' stories, the ceremony will include an Army ROTC color guard and brief remarks by university and military representatives.

Iowa State's traditional Gold Star Hall Ceremony will be at 3:15 p.m. Thursday, Nov. 10, in the Memorial Union Great Hall. The ceremony honors fallen soldiers who are former Iowa State students. This year, four will be honored. The ceremony is free and open to the public.

The following will be honored during the ceremony. Click on their names to go to their stories and photos.