Using hand chisels and electric routers, 18 Iowa State students and 11 Augustana students -- some in teams, some working individually -- have carved their own original designs on 4-foot-by-8-foot sheets of birch plywood. They will use a steamroller as a printing press to create large-format prints from the woodblocks at Rueter's, a construction and equipment dealer at 5815 W. Lincoln Way in Ames.

This is the 10th year for the steamroller printmaking event. Friday's session will be from about 10 a.m. to 3 p.m. behind the main building. (Rain date is Oct. 21.) The public is invited to watch the printing process.

The physical challenges associated with carving, inking and printing large-scale blocks demand collaboration from all participants, she said. 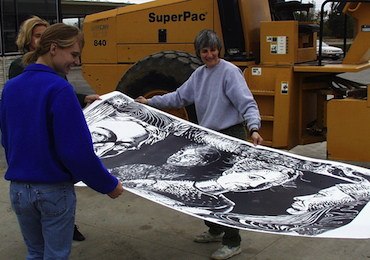 Three students chose to make their own blocks.

Troy Chebuhar, Burr Ridge, Ill., integrated studio arts, made "Thumbs Up For Both." This piece is about the past and the future, each shown with contrasting styles, he said.

"The guy is giving thumbs up to both sides, saying 'everything is good,'" Chebuhar said.

Ananya Arora, Urbandale, a graduate student in interior design, used the College of Design's CNC router to create "Metamorphosis." The pattern began as a simple square and evolved into a complex lattice of polygons using different combinations, Arora said.

"The intent was to create something that illustrated how great complexity could be attained using simple components. The pattern allows the viewer to get lost in it but also find their way back, being elusive and accessible at the same time," she said.

Graphic design major Jordan Becker, Avoca, also used the CNC router to make his print about cycles of flora. His print will be folded into a 2-foot-by-2-foot book so the progress will unfold gradually.

Scott Parsons, associate professor of art at Augustana College, and his students will bring their own woodblocks to print. Their images will include animals such as a moose, bear and raven, as well as human figures, Katz said.

The large prints resulting from the steamroller printmaking session will be displayed Oct. 31 - Nov. 11 in the College of Design's atrium, the Lyle E. Lightfoot Forum. 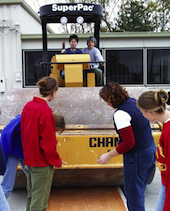 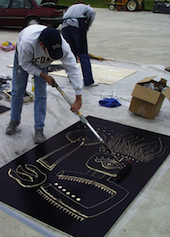