AMES, Iowa - Jorge Cham will screen the film adaptation of his popular online comic strip about life in academia and speak at Iowa State University on Tuesday, Sept. 27. The film, "Piled Higher and Deeper: The Ph.D. Movie," will begin at 7 p.m. in the Memorial Union Great Hall. Cham's talk will follow the 67-minute film. Both are free and open to the public.

Cham has been called the Dilbert of academia for his comic strip, "Piled Higher and Deeper." Appearing in numerous university newspapers, it chronicles the struggles and humor of the lives of graduate students and stressed out academics. The film adaptation introduces audiences to this unique and funny culture of academia. Filmed on location at the California Institute of Technology, the movie follows four graduate students as they struggle to find balance between research, teaching and their personal lives. Produced, directed and starring Ph.D. students and researchers, "Piled Higher and Deeper" features two MacArthur "Genius" Award recipients.

Cham will speak about his experiences as a doctoral candidate in mechanical engineering at Stanford, and as an instructor and researcher in robotics at Cal Tech. Three books compiling his comic strips are "Life is Tough and Then You Graduate," "Scooped!" and "Academic Stimulus Package."

The film and lecture are cosponsored by the colleges of Agriculture and Life Sciences, Engineering, Liberal Arts and Sciences and Veterinary Medicine; Graduate and Professional Student Senate; the Graduate College; Latino Heritage Month; SUB Films and the Committee on Lectures, which is funded by the Government of the Student Body. More information on ISU lectures is available at http://www.lectures.iastate.edu, or by calling 515-294-9935. 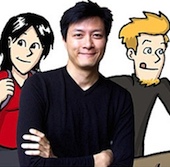